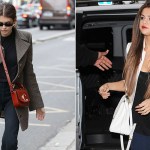 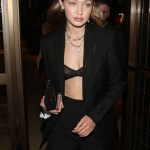 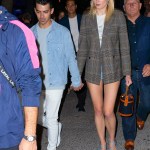 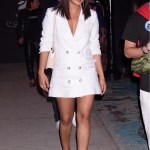 The latest trend taking Hollywood by storm is the blazer, and so many celebs have been rocking the jacket a variety of different ways — from casual to dressed up, there are so many ways to style the transitional trend.

Gigi Hadid, 22, has been rocking the blazer trend all summer long, but her latest look is seriously amazing. She stepped out in New York City on August 19, when she opted to wear a pair of skintight black biker Tna Atmosphere Shorts from Aritzia, which is the season’s hottest trend, paired with a blue and pink tie-dye T-shirt. On top of her outfit, the supermodel threw on an oversized, crisp white blazer by Wardrobe.NYC from Release 04 DENIM which completely tied the look together. She accessorized with a pair white Reebok Classic Sneakers, Mercii Solstice Earrings, her fave Missoma Axiom Chain Necklace, a Casetify Neon Sand Liquid iPhone Case, white Dmy by Dmy Valentina Sunglasses, a Jacquie Aiche Opal Inlay Eye Pendant Necklace, and a colorful Rogue Matilda tote bag.

Priyanka Chopra, 36, rocked the trend when she was hanging out with Mandy Kaling, 37, in New York City on Sunday, April 7. Recently married Priyanka, opted to wear a $130 bright orange Mango Double Breasted Blazer, which she chose to leave unbuttoned with a high-neck white t-shirt underneath. She tucked the tee into a pair of super high-waisted, light wash cropped flare jeans, adding a pair of leopard print sock booties, red cat-eye sunglasses, and an oversized black leather tote bag. Aside from Priyanka, another celeb who has been loving this look is Hailey Baldwin, 22. The blonde model has tried the trend multiple different ways. Most recently, Hailey was out in Beverly Hills on March 28 when she opted for a pair of super baggy Maison Margiela Cut Out Boot Jeans which she paired with a tiny cropped white Brandy Melville Beyonca Tank. Tying the outfit together was a long, tan Acne Studios Jana Blazer, which she kept open, topping her look off with bold, neon green Balenciaga Square Knife Pumps. Another look Hailey has tried, was on March 27 in LA, when she donned a skin-tight black spaghetti strap Brandy Melville Kyran Dress with an oversized neon green Acne Studios Two-Button Blazer in Fluo on top, paired with chunky white Adidas Fyw S-97 Sneakers.

Another model who has been trying this trend a lot lately is Kaia Gerber, 17. The daughter of Cindy Crawford, has not only been trying the look out, she’s been wearing the same exact blazer a ton of different ways. She was first spotted in the gray Khaite Petra Tweed Long Blazer in February while in NYC. Since then, she has transformed the blazer to suit the crazy weather changes we’ve been having. On March 30, Kaia rocked the blazer with a pair of tight, high-waisted black skinny jeans with a Daydreamer Led Zeppelin 1975 T-Shirt, accessorized with black Converse Chuck Taylor All Star Hi Sneakers. Most recently, she donned the blazer in NYC on April 7, with a pair of dark wash boyfriend jeans, a t-shirt, black leather Jimmy Choo Cruz Boots, and a black Saint Laurent Betty Bag.

Gigi Hadid, 23, jumped on the bandwagon on April 4 in NYC when she donned a fitted metallic silver blazer with light-wash mom jeans, black Ugg Boots, and a pair of Vogue Eyewear x Gigi Hadid Sunglasses. Another one of our fave stars who tried the look recently was Jennifer Lopez, 49, who rocked a fitted black Balmain blazer with chunky gold buttons, over a tight black tank top that showed off ample cleavage, and was tucked into tight black leather skinny pants.