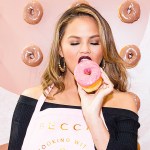 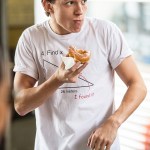 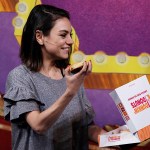 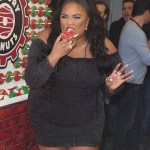 November 5 is National Doughnut Day, and we’re taking a look at some of our favorite celebs who’ve been caught chowing down on the sweet treats over the years!

National Doughnut Day falls on November 5 every year, which means it’s the perfect excuse to buy some doughnuts (or donuts, depending on your preferred choice of spelling) and indulge in the sweetness without feeling any guilt, right? If you need some inspiration, these celebrities have ALL done it. From Chrissy Teigen to Mila Kunis and more, we’ve rounded up some stars who have had NO shame when it comes to stuffing their faces with donuts.

While attending a cooking event, Chrissy snacked on a donut and made a show of posing for photos while stuffing the treat into her mouth. She ate a pink-frosted donut, and didn’t think twice about potentially ruining her dark lipstick as she took a bite. Of course, Chrissy managed to look totally glamorous while chowing down! Don’t worry, though — she wore an apron, just in case any crumbs got away.

Tom Holland, 24, has also been caught snacking on a donut in public. Spider-Man had a sheepish look on his face as cameras caught him mid-chew on the street once, with the rest of the glazed donut in his hand. Meanwhile, in 2018, Mila, 37, attended an event for the Hasty Pudding Theatricals at Harvard University. She was named ‘Woman of the Year’ at the event, and she was given a big box of Dunkin’ Donuts to celebrate.

Photos from the event showed the Black Swan star happily holding a donut in her hand and preparing to eat it in front of the huge crowd. In her other hand, she held the box of the rest of the donuts, and left our mouths watering. If Mila can look as good as she does while chowing own on donuts once in a while, there’s hope!

Click through the gallery above to check out these stars and more, including Lizzo, eating donuts. Then, of course, get down to your favorite donut shop and treat yourself with the snack — it IS National Doughnut Day, after all!