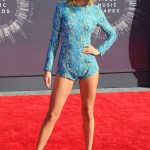 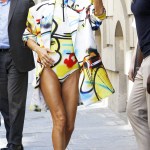 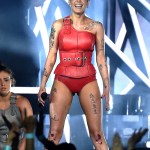 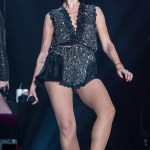 Bodysuits are typically worn with additional bottoms like pants or a skirt, but some stars – like Taylor Swift and Celine Dion – have rocked the one-piece by itself.

When you think of a bodysuit, you likely don’t imagine it on its own. The leotards are usually paired with jeans, skirts or other bottoms since they’re cut so high up on the thigh. But that doesn’t mean the one-piece can’t be worn by itself! Celebrities like Taylor Swift and Cardi B have all pulled off wearing bodysuits without pants over top of them.

Taylor crossed the line from romper to bodysuit when she attended the MTV Video Music Awards in August 2014. The singer sported a blue leotard covered with green and yellow letters to the Los Angeles event. Her one-piece, designed by Mary Katrantzou, was paired with maroon peep-toe booties.

While we typically see bodysuits worn solo as red carpet looks or performance outfits, some stars are brave enough to take the high-cut outfit to the streets. Celine Dion showed off her eccentric style when she stepped out in Paris on June 29. She rocked a colorful Off-White bodysuit with a matching blazer and absolutely nothing covering her upper thighs. Her look was finished off with blue and black heels from the same designer, along with sunglasses and hoop earrings.

While we’re personally not likely to go out in public wearing a bodysuit and nothing else, there are plenty of celebs who are far braver than us. Head up to the gallery above to see how more stars have styled leotards without any additional bottoms.