“Vacation Decker style,” Jessie James Decker captioned a Nov. 26 Instagram post featuring her and Eric Decker’s three children, Vivianne, 8, and sons Eric Jr., 7, and 4-year-old Forrest. In the photo, the three children appeared incredibly jacked, and each sported a set of 6-pack abs. While most in the comment section asked Jessie, 34, to “drop their workout plan, please,” some said that the photo “doesn’t look right.” This prompted the “Wanted” singer to respond. “It’s a sad world we live in today when having healthy fit kids who are super active, play sports, build muscle naturally is ‘weird,” she wrote.

“From one mother to another,” she added in a second comment. “Please don’t call my children’s appearance strange just because they don’t look the way you think they should. It’s unkind.”

Most of the comments were positive. “How do they all have better bodies than me?????” asked Jessie’s Dancing With The Stars pro Alan Bersten. “Well, this is humbling to see right after thanksgiving…drop their workout plan, please,” added Amanda Mertz. “How jacked are these lil stud muffins?” asked Julian Edelman. “Sunshine football and beach time!! Gobble gobble’d in our element,” added proud papa Eric Decker, 35. 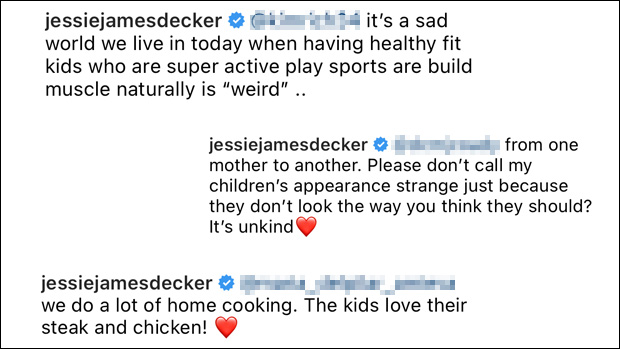 Jessie’s post may also be modified. “Had the time of our lives on a much-needed family vacation!!!! So grateful for the sun, fun, food, family, and friends,” the singer captioned an IG Reel of her family. In the short montage, Jesse and Eric’s children, while appearing healthy, aren’t as jacked as they are in that other photo. The reel contains multiple instances of the children dressed in the same swimsuits from the first photo, sans the six-pack abs and ripped muscles.

Jessie’s three children might have a new sibling for their next family vacation. Jessie admitted in a 2022 IG post that she was considering having another child. “It depends on the month, girl!” she said with a laugh while talking with HollywoodLife in June. “I go through phases… this month is a ‘No.’ Next month might be a ‘Yes.’… You know, I’m in a really good place, and I feel young and Eric and I are certainly not preventing anything!”

She also reflected on her decade-long marriage to Eric. “I think sometimes people can get caught up in stuff and we just want to keep it real,” she told HL. “We both grew up humble and were raised by amazing mothers. I think we both want to be great parents to our kids and we like to keep things as normal as possible,” she said. “We do all the normal things, and I think that’s the beauty of it.”

Related: Jessie James Decker’s Kids: Everything To Know About Her 3 Children With Eric Decker