Ray J had a rough weekend. Days before the Internet had a blast over his Cup Of Noodles stunt at the BET Awards, Ray J, 41, appeared on the Verzuz showdown before headliners Omarion and Mario squared off. He performed “One Wish” Off of 2005’s Raydiation, and it failed to live up to the hype. Ray J eventually tried to laugh off the lackluster showing by sharing a video of comedian Tyhem Commodore recreating the performance.  Brandy, however, wasn’t in the mood. 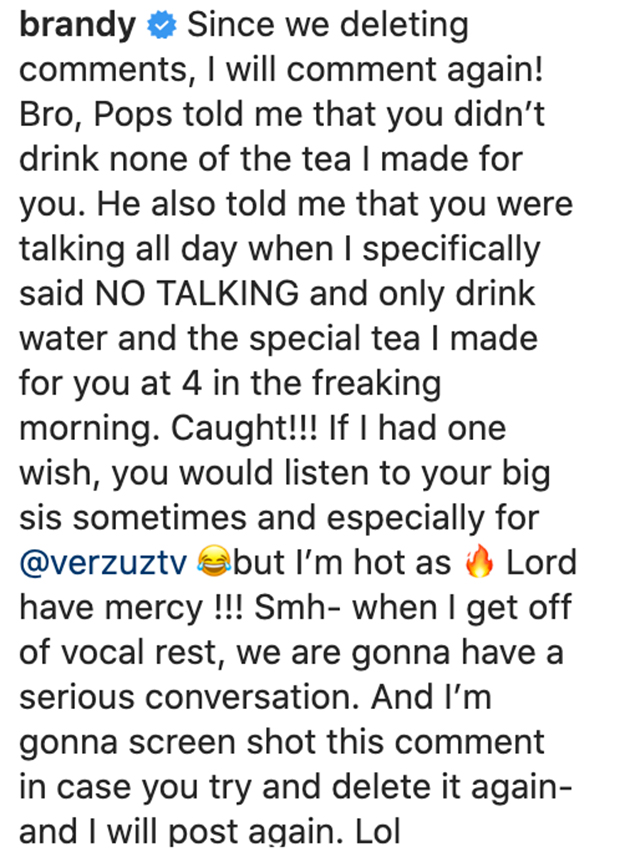 “Since we deleting comments, I will comment again!” Brandy, 43, began. “Bro, Pops told me that you didn’t drink none of the tea I made for you. He also told me that you were talking all day when I specifically said NO TALKING and only drink water and the special tea I made for you at 4 in the freaking morning. Caught!!! If I had one wish, you would listen to your big sis sometimes and especially for @verzuztv [laughing emoji] but I’m hot [fire emoji] Lord have mercy !!! Smh- when I get off of vocal rest, we are gonna have a serious conversation. And I’m gonna screenshot this comment in case you try and delete it again- and I will post again. Lol”

Ray J appeared during the pre-show battle between him and Bobby V versus Pleasure P and Sammie on Thursday (June 23). “Hey, I missed a few notes on that. But I was holding my son,” he said to the audience after the middling “One Wish” performance. “Y’all gotta excuse me for that.” The clip went viral, with many having fun at Ray J’s expense.

After the heat of the Verzuz flub died, Ray J found himself back in the Twitter spotlight after bringing a Cup of Noodles to the 2022 BET Awards on Sunday. “Naw. Yo, Ray, you ain’t eat at home?” asked the audience member who recorded Ray J sneaking a bite between events. His girlfriend, Princess Love, even shared a video of him eating before sitting up and acting as if he had been paying attention the whole time. “I’m not gonna front,” Princess Love, 37, captioned the video, “I wanted a bite.” Meanwhile, Brandy had a great showing, appearing on the BET Awards stage alongside Jack Harlow to end their awkward feud and remind everyone that she can “murk [anyone] in rap at 43 on [their] own beats and then sing [their] ass to sleep.”