Tom Brady announced that he would be coming out of retirement to play another season with the Tampa Bay Buccaneers on March 13, and his wife, Gisele Bundchen, is on-board. “Here we go again!” she commented on his announcement post. “Let’s go lovvvey! Let’s go Bucs!” She also included a fire emoji to complete her message. When Tom announced his retirement in February, he explained that spending more time with his family was one of the biggest reasons for his decision, so to have Gisele’s support in reversing that choice is obviously crucial! 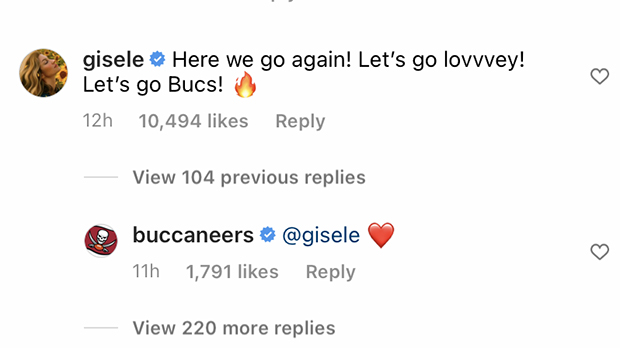 It was just a month and a half ago, on Feb. 1, that Tom revealed he would be retiring from football after a legendary career. During the down-time following his announcement, he took a trip with Gisele and the kids to Costa Rica, and after re-charging he seemingly changed his mind. “These past two months I have realized my place is still on the field and not in the stands,” Tom explained. “That time will come. But it is not now.”

Tom gave his family and teammates a special shoutout for allowing him to make this decision. “I love my teammates and I love my supportive family,” he wrote. “Without them, none of this is possible. I’m coming back for my 23rd season in Tampa. We have unfinished business.” Tom played the first 20 seasons of his football career with the New England Patriots. He was traded to the Tampa Bay Buccaneers for the 2020 season, leading the team to a 2021 Super Bowl win. The Bucs made the playoffs again during the 2021 season, but lost in the Divisional Round to the Los Angeles Rams, who went on to win the 2022 Super Bowl.

When Tom retired, Gisele wrote a lengthy Instagram post reminiscing about his career. “I’m so proud of you and of everything you have had to overcome physically and emotionally over the years,” she gushed. “I am in awe of your dedication, and of everything you have achieved. You love what you do and you leave behind a legacy that is a beautiful example for future generations.” She also raved about being “excited for what the future holds” at the time.

Tom and Gisele have two children together — their son, Benjamin, is 12 and daughter, Vivian, is 9. Tom also has a 14-year-old son, Jack, with his ex, Bridget Moynahan.