Adele rarely ever collabs with others on a song, but if Nicki Minaj ever wants to get the “Easy On Me” singer’s voice on a track, she can just do it herself. While chatting with James Corden during Thursday’s edition of the Late Late Show, James, 43, showed Nicki, 39, a clip from when Adele, 33, appeared on “Carpool Karaoke” in 2016 and sang along to Nicki’s “Monster.” James then wondered if Nicki could turn the tables and impersonate Adele. “In order to channel Adele, I sort of have to think like a Black lady in London, right?” said Nicki, nailing every cadence of the British singer’s speech in a spot-on impression. ‘

“The thing is, normally, everybody knows, my British accent is a pos white lady, a rich white lady, right?” continued Nicki-as-Adele, “But, with Adele, I sort of have to like, transform. Like, you know, like she might have used to sell crack. Like maybe, she used to be hustlin’… and then you know, she got her big break. … It’s so expressive, right?” James raved about the accent, and how Nicki even got Adele’s physical mannerisms down.

Nicki’s impression came from love. After James showed the clip, the “Super Bass” rapper raved over Adele singing along to her song. “First of all, it’s Adele. Second of all, it’s ‘Monster.’ You guys made such an amazing tag team, by the way, I never got to tell you that,” she said. “That made my day, my year. I probably got a thousand phone calls about that one thing.” 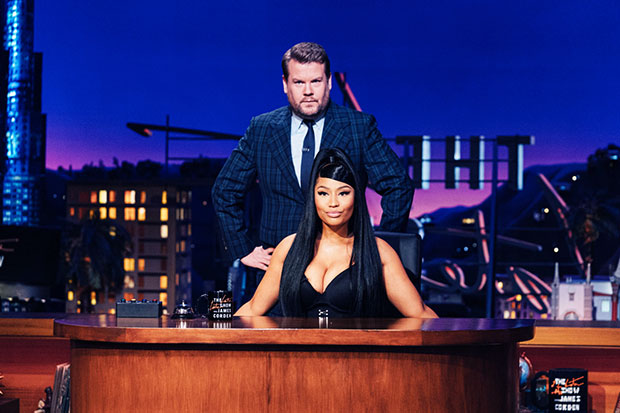 Nicki’s appearance on the Late Late Show coincided with the release of her new song, “Do We Have A Problem?” The song, featuring Lil Baby, came with a cinematic video featuring Joseph Sikora and Cory Hardrict. Nicki’s last album was 2018’s Queen, and to celebrate her return to music, she took over the Feb. 3 Clipper’s game at Crypto.com Arena, painting it pink and giving unsuspecting fans a first listen of the new single. The Clippers Spirit squad then welcomed Nicki a performance to “Super Bass” before bestowing her with her own personalized jersey. “Do We Have a Problem?” hints that more music is coming, meaning that this truly is the return of the Queen.