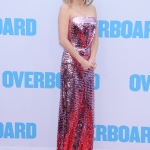 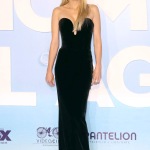 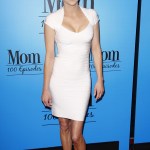 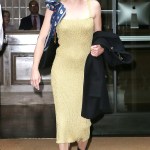 Anna Faris was spotted at Starbucks with her son Jack, 9! The mother-son duo were seen in the rare photos on Friday, Jan. 7 as they exited a Los Angeles location for the popular coffee chain, presumably heading back to Anna’s car. The Scary Movie actress held onto a hot to-go beverage and take out bags as she passed her son a cold pink drink.

Jack looked so much like his mom with his blonde hair (his dad Chris Pratt, 42, is a brunette). He rocked a casual ensemble consisting of a red t-shirt and matching sneakers, and cotton black shorts. The bottoms matched the Nike Swoosh on his socks and protective black face mask. Jack was also sporting a pair of neutral colored glasses.

Meanwhile, Anna stayed cozy in black pants with warm camel Ugg boots. She threw on a short black puffer from luxury label Moncler, sporting a olive green baseball cap with her blonde locks peeking out. Other angles revealed she was carrying a camel colored leather purse over her left shoulder. 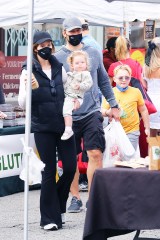 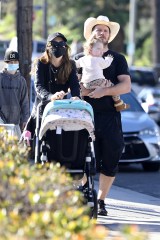 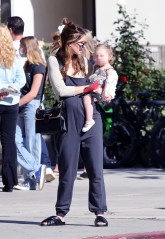 The Baltimore native shares Jack with ex-husband Chris Pratt, who she met on the set of film Take Me Home Tonight in 2007. The pair wed in 2009, and welcomed Jack — their only son — in 2012. Sadly, the couple divorced in 2018 but have since moved onto other marriages.

Chris tied the knot with Arnold Schwarzenegger and Maria Shriver‘s daughter Katherine Schwarzenegger, 32, in June 2019. Katherine, who wrote children’s book Maverick and Me, gave birth to their daughter Lyla Maria Pratt in Aug. 2020. Reports surfaced that the brunette is expecting her second child with the Guardians of the Galaxy star in Dec. 2021 — making Jack a big brother two times over!

Anna has also re-married since her split, in a surprise fashion: she wed cinematographer Michael Barrett after meeting on the set of 2018 movie Overboard (a remake of the the Kurt Russell and Goldie Hawn classic from 1987). The surprise elopement came after a secret engagement in 2019.