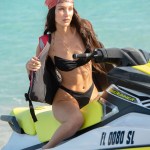 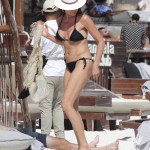 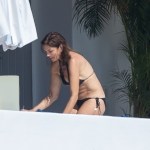 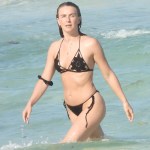 Greetings from paradise! The ‘Get Shorty’ actress looked happy as she rang in the New Year beachside in a bikini.

It looked like Heather Graham, 51, found a relaxing way to welcome 2022, as she celebrated the New Year in a sexy new Instagram on Jan. 5. The Boogie Nights actress stunned as she took a bombshell beach selfie while relaxing in front of crystal clear waters with a wooden pier in the background. Looking swim-chic, Heather donned a classic, black triangle-top bikini with a pair of wide, tortoiseshell sunglasses and tousled blonde tresses with a rosy pout. She captioned the snap with a simple, “Happy New Year !” and a blue heart emoji.

Heather’s cool vacation comes not long after the release of her latest film: The Last Son, starring Colson Baker aka Machine Gun Kelly, Sam Worthington, and Thomas Jane. In the movie, she plays Anna, the mom of MGK’s sharp-shooting outlaw Cal.

Heather said she loved working with the rocker on the film, but also admitted she had little idea who he was before making the movie together. “It’s funny because I actually didn’t know who he was, to be honest,” she told ABC Audio in Dec. 2021. “I mean, my friend’s kids know who he is,” the never-married star added with a laugh.

Heather Graham Through The Years -- Photos 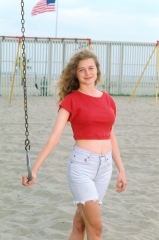 Movie veteran Heather was quick to give MGK props for his acting, telling the program, “I think, you know, he’s very raw. Like, I like that he doesn’t because some actors are kind of ‘actor-y.’ And I like that he just has raw talent. I really enjoyed working with him. It was fun.” She added, “Sometimes actors try to control how they come across and they’re really practiced…It felt like he just put his heart out there. He hasn’t probably had as much experience. So he just kind of put it all out there. And I kind of liked that. Actually, it was fun, just sort of just felt like real.”

Meanwhile, the star is gearing up to work on the rom-com The Other Zoey with Andie MacDowell, Josephine Langford, and Patrick Fabian. The movie is about a bright college student whose views on love are turned upside down after a mistaken identity mishap.