President Joe Biden, 79, and First Lady Jill Biden, 70, were accompanied by their furry new friend while on a walk during their holiday vacation to Delaware. The couple and Commander, the adorable new puppy they adopted just days before Christmas, were pictured taking a stroll on December 28 on the Rehoboth Beach. The little German Shepherd appeared to be enjoying the open area of the president’s home state to walk and run around.

The Bidens dressed casually to take Commander out for a walk. Joe wore a black jacket, denim jeans, and black sneakers. He also had on a black hat and a protective face mask, amidst a surge of COVID-19 cases due to the Omicron variant. The 46th president walked Commander on a leash, though at one point he let the dog go free to roam around the beach and play fetch with a tennis ball.

As for Jill, she wore a black jacket, blue jeans, gray Nike sneakers, and a protective face mask for the outing. She walked at a distance from her husband, and held onto the tennis ball until it was time to play fetch with Commander. The couple were reportedly joined by the Secret Service, though they didn’t come close to Joe and Jill. No other people were on the beach, aside from the paparazzi who snapped the photos of the Bidens and Commander. 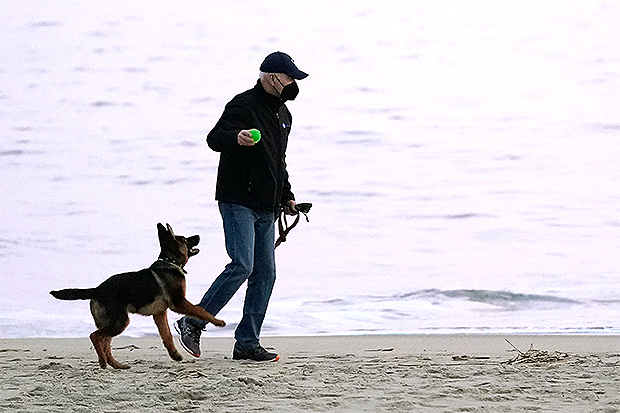 The Bidens officially welcomed Commander into their family on December 20. Commander was a gift from the president’s family, according to CNN, and the canine is the first new puppy to join the Bidens in the White House. His arrival came six months after the Bidens’ German Shepherd Champ died on June 19 at age 13. The president and first lady got Champ back in 2008, after President Barack Obama‘s historic election, which Joe Biden was the vice president for.

Aside from Commander, the Bidens are also proud dog owners of another German Shepherd, Major, 3. They had Major since 2018, though he was temporarily brought to Delaware in March 2021 for a few weeks after he’d bit a security guard and caused a minor injury on March 8. After the training, Major returned to the White House later that month.

Related: Ketanji Brown Jackson: 5 Things To Know About The Supreme Court Justice Confirmed By The Senate