Larsa Pippen insists there’s no bad blood between her and her former bestie, Kim Kardashian. The Real Housewives of Miami star, 47, commented on a Page Six Instagram post on Dec. 17 about a shady comment she allegedly made about the SKIMS founder, 41.

“All love no shade,” she wrote, alongside a heart emoji, after it appeared as though she did shade Kim on RHOM. “People thought I wouldn’t make it without Scottie [Pippen],” Larsa said during a private confessional on the season premiere that dropped on Peacock on Dec. 16. Larsa was referencing her NBA star ex-husband, before adding, “People thought I couldn’t make it without some old friends”. And it was during that very moment that a photo of herself and Kardashian flashed on screen. “I’m great. I just basically want to, like, live my best life, have fun, do whatever I want unapologetically,” she added. 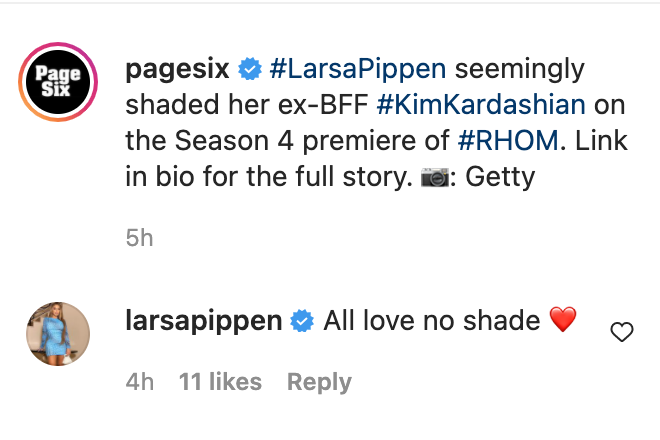 Larsa didn’t say much more about her friendship with Kim in the first two episodes of Season 4, but as fans know, her relationship with Kim deteriorated in 2020. And while Larsa appeared on Hollywood Raw Podcast in November 2020, she insinuated that Kim’s soon-to-be ex-husband Kanye West contributed to the end of their friendship. She accused the rapper, 44, of “brainwashing” Kim. “I just feel like Kanye was in a place where he really didn’t trust anyone with Kim,” she said at the time.

Not much more is known about their friendship fallout, but we have a feeling more will be revealed as the season plays out. Especially because in the dramatic trailer, Kim was brought up at a dinner party, when Adriana de Moura, 56, said that Larsa will never be like the SKIMS billionaire. “You left this group of women, come back with a butt as big as Kim Kardashian’s, trying to become the new Kim Kardashian, which you’re never going to be,” she said. Yikes!

Related: Kim Kardashian As Marilyn Monroe: All The Times She’s Looked Like The Blonde Bombshell