The ‘Modern Family’ actress opened up about the trolling she received online when her career started to take off a decade ago.

Ariel Winter revealed many of the cruel things that online bullies said to her, as she rose to fame as a teenage star on the ABC comedy Modern Family. The 23-year-old actress was a guest on the Facebook Watch series Red Table Talk: Estefans on Thursday December 9, and spoke about how she was trolls attacked her as she was going through puberty in mean and hurtful comments on her Instagram.

During the discussion, Ariel mentioned that many people freely attacked her online, because they were anonymous. “I got called a fat slut when I was 13. That was rough. Because I had gained weight and my body changed, I had to wear different outfits, and I wore a dress that had cutout here,” she said, as gestured to her chest. She explained that she felt like many people were upset that she wasn’t more like her sitcom character Alex Dunphy. “From them, they’re like, ‘How did you go from being Alex Dunphy to being like a whore. You’re trying to be sexy. You’re 13. You’re a horrible role model. What’re you showing people? You got so fat. Now, on TV, you look so fat,'” she explained.

Ariel also recalled gaining weight after going on anti-depressants in high school, and she mentioned how she thought about changing her appearance to appease the haters, but it was a fruitless effort. “Every time I changed something, something else was wrong.

Ariel Winter Through The Years -- Pics 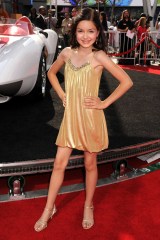 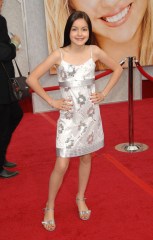 When the hosts asked how Ariel was doing now, she said that she treasures her time in therapy, but it sounds like she’s doing much better, and has shown lots of love for her body. “I’m definitely still on a journey,” she said. Earlier in the discussion, the actress showed lots more self-confidence in her beautiful self, and called out people who said that she deserved shaming or inappropriate messages for showing off her body online. “Just because I feel like I look good. I look like a snack or an entrée,” she said. “You can put your titties out there and feel good about it, and be like, I put them out there. They’re not for you. These are for me. I can put what I want about me online.”