Tom Brady has an epic legacy in football — and he is hopeful his eldest son Jack will carry the torch, despite stepmom Gisele having a slightly different opinion!

Tom Brady, 44, will forever be known as one of the greatest athletes of all time — and the legendary quarterback is hopeful that his son Jack, 14, will “someday” follow in his footsteps! Tom shared that his eldest child could have a future as the “starting quaraterback” at his dad’s alma mater the University of Michigan on SiriusXM’s podcast Let’s Go!

Notably, Tom played on the university’s NCAA division team, the Michigan Wolverines, from 1996 to 1999. He added that he sees Jack as a “little future Wolverine” in the chat, published on Nov. 30. The two even watched the Wolverines recent win over Ohio state, where Tom revealed he told his son,'”That’s where you’re gonna be! You’re gonna be in the ‘Big House’ someday. You’re gonna be the starting quarterback for Michigan.” 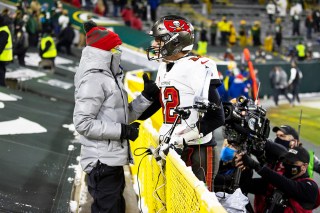 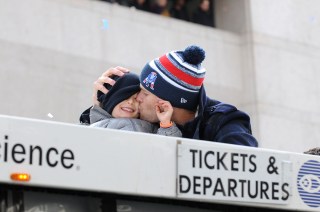 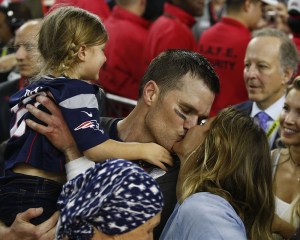 Stepmom Gisele Bundchen, 41, however, had different ideas. After overhearing Tom’s conversation with Jack, the San Mateo native revealed his supermodel wife said, “‘Just let him be what he wants to be for god’s sakes!”‘

Tom shares Jack with ex Bridget Moynahan, 50, who he dated from 2004 until 2006. Bridget confirmed she was pregnant in Feb. 2007 just months after the split, and the two have actively co-parented the teen since. Tom later married Gisele in 2009, and welcomed two adorable kids: Benjamin, 11, and Vivian, 8.

The Tampa Bay Buccaneer has previously opened up about playing in Michigan and how it influenced his later career. “When I was a freshman in high school, I was the backup quarterback on a team that didn’t win a game. I was barely recruited to college. I chose Michigan,” to Sports Illustrated. “I fought pretty hard over the course of my college career. By the fourth year, I was starting. We had a pretty good year. My fifth year, I played pretty well. I thought I would be a high draft pick.” Tom was later drafted to the New England Patriots, winning six Super Bowls over 20 amazing seasons.