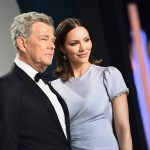 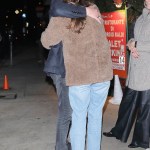 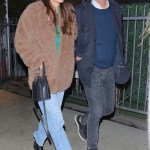 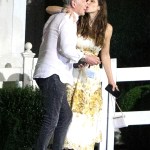 Katharine McPhee and David Foster looked every inch the loved up couple as they hugged during a romantic night out.

Katharine McPhee showcased her megawatt smile as she was spotted on a romantic dinner date with husband, David Foster. The loved up couple, who recently welcomed their first child together, enjoyed a parents’ night out at Giorgio Baldi in Santa Monica on November 17. The American Idol alum, 37, rocked a pair of faded blue jeans and cozy brown jacket, while tying her chestnut locks back with a simple clip. She finished the casual look with a black leather bag and matching high heels. Meanwhile, the 71-year-old music producer kept it cool in a navy blue jacket, black jeans and sneakers.

The fun-filled outing comes almost nine months after Katharine gave birth to the pair’s son Rennie David Foster. While the parents have been busy raising their little tot, they sure haven’t skipped out on letting the world know how much they adore him.  “I mean, just everyone talks about it, but the love that you have, it just is like a heart explosion,” Katharine gushed in an EXCLUSIVE interview with HollywoodLife.com. “Maybe if I’d had a baby in my early 20s wouldn’t feel this way. But just really, nothing else matters.”

The Smash vet went on to explain how motherhood has completely changed her outlook on life — all for the better! “It’s the most important task of your entire life, at least that’s what it feels for me,” Katharine told HL. “I guess that was surprising to me, too. Because now, with anything else, I’m just like, ‘Sure, I’ll do this,’ and ‘Sure, I’ll go after this job,’ but if it doesn’t happen, it’s okay, because I’m so happy just be raising this little guy.”

Katharine McPhee -- Pics Of The Singer 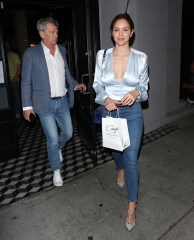 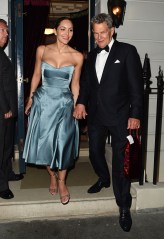 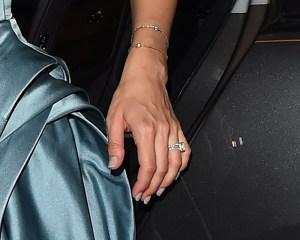 As for the busy parents carving out time for themselves, Katharine admitted that their current schedules are perfectly suited for the entire family. “David’s definitely not working like he used to, because he’s just chosen not to. He’s been working on a musical, himself, that I’ve been just in the background being his cheerleader and hopefully that will go to Broadway next year. So, he’s home a lot, which is so great,” she explained to HL. “Then obviously, with COVID, we were with each other all the time, and then now we just have a plus one.”

“But we’re honestly together a lot, so we don’t have to really feel like we’re making special time for each other,” she added. “Going to dinner feels like a special time!”

Katharine and David first met in 2006, when he mentored the singer during her season of American Idol. They struck up a romantic relationship years later and ended up tying the knot in June 2019.