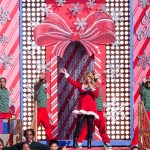 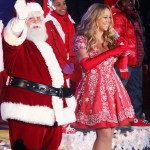 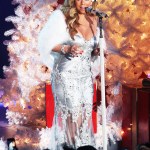 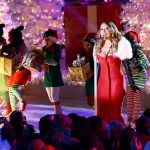 Mariah Carey looked fabulous when she rocked a skintight red sequin dress to celebrate the end of Halloween & the start of Christmas.

The queen of Christmas has spoken! Mariah Carey, 52, posted a video of herself wearing a sequin red dress while smashing pumpkins to get ready for Christmas. In the video, Mariah rocked a tight long-sleeve sequin gown with a plunging slit on the back that revealed her sky-high red sparkly heels.

She captioned the video, “Ready? Let’s go! #MariahSZN,” with a pumpkin emoji and arrow pointing to a Christmas tree. In the video, a bunch of pumpkins were carved with the words, “It’s not time,” and then Mariah showed up wearing her long-sleeve gown while holding a massive candy cane bat.

Mariah took the candy cane and started smashing all of the pumpkins while the jingle to her hit song, “All I Want For Christmas,” played in the background. The video then transitioned into Mariah wearing a skintight red sequin jumpsuit that resembled Santa Claus.

The jumpsuit featured long-sleeves and a furry white off-the-shoulder neckline. Cinched around her tiny waist was a thick black leather belt while diamond earrings and rings completed her look.

At the end of the video, the screen read, “It’s time!! To smash that pumpkin and treat it as pie… cause we still gotta get through Thanksgiving!!!”

Every year Mariah gets in the holiday spirit super early because her hit song has become a Christmas anthem. She is always rocking some sort of sequin gown or outfit and she slays her holiday looks every year.