Joe Jonas and Sophie Turner paid tribute to Hilary Duff, who played Isabella, and Yani Gellman, who played Paolo, in ‘The Lizzie McGuire Movie,’ by dressing up like the characters for Halloween.

Joe Jonas, 32, and Sophie Turner, 25, turned heads this Halloween weekend when they stepped out as two of the most memorable characters of the 2004 film, The Lizzie McGuire Movie! The Jonas Brothers singer took on the role of Paolo, played by Yani Gellman in the flick, while the actress dressed as Isabella, played by Hilary Duff, and they were photographed in their epic outfits while out and about this weekend. Joe wore a black top under a black long-sleeved button-down shirt, black leather pants, black boots, and a microphone headset as Sophie wore a white sleeveless dress under a neon green train section, fishnet tights, black boots and her own thin white microphone headset.

The lovebirds were all smiles as they walked outside while enjoying the holiday and Sophie showed off reddish hair that was pulled partly back. They held hands throughout the night and looked as comfortable as could be while making lasting impressions with their costume choices.

In addition to getting their photos taken while out, Joe and Sophie took to their Instagram pages to share a photo of the two of them posing in their looks along with Olivia De Jonge. “Have you ever seen such a beautiful night?” Joe wrote in his caption while Sophie’s caption read, “Sing to me Paolo.” 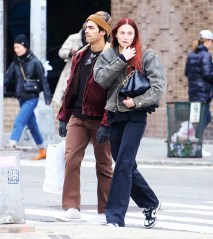 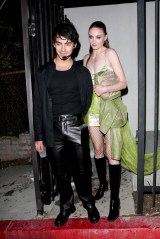 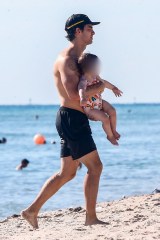 Since Joe and his brothers Kevin Jonas and Nick Jonas have an awesome history with Disney, which produced the Lizzie McGuire series and movie, when it comes to their career, it’s not too surprising that he would choose a Halloween costume that praises one of the channel’s productions.

In addition to getting attention for his costume, Joe also got attention when he reunited his Camp Rock co-star and fellow singer Demi Lovato. He shared a photo of the happy moment to his Instagram story along with a purple heart.