Ashton Kutcher was known to rock the popular 2000s style back in the day, and wife Mila Kunis confirmed the actor hasn’t given them up!

Mila Kunis, 38, hilariously put husband Ashton Kutcher, 43, on blast after he claimed he got rid of all his trucker hats. The actor made the comment during an appearance on YouTube’s Hot Ones two years ago, however, Mila wanted to correct the narrative during her own appearance on the hilarious series.

When asked by host Sean Evans if it was true (in front of a set up of hot sauces and wings), she looked off-camera and said, “What are you talking about? You didn’t get rid of anything. You have plenty of trucker hats, and the entire ’70s wardrobe is downstairs. What is this?” Ashton, who did not appear on the virtual appearance, could be heard laughing as he replied, “Who are you talking to?” Mila then quipped, “Lies. Lies.”

In the era of Juicy Couture, Uggs and “Return To Tiffany” silver jewelry, Ashton arguably pioneered the trucker hat trend of the early ’00s. The actor regularly wore them to basketball games, red carpets and out and about with a slew of sayings, including one that read “Teenage Millionaire” from clothing brand dELiA*s back in 2003. Paris Hilton, Nicole Richie, Britney Spears and other stars were also fans of hat style, primarily wearing logo styles by Von Dutch. Of course, ’00s fashion is back in trend again — so perhaps it was wise of Ashton to hang onto his extensive collection! 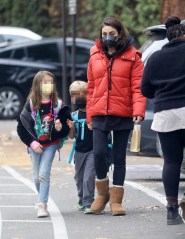 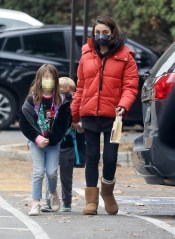 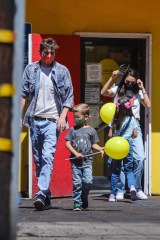 Ashton and Mila met as co-stars on That ’70s Show when she was just 14, also sharing her first kiss with him on-set (the actors played characters Kelso and Jackie, respectively). “I was like, ‘Oh, he’s so cute, it’s the Calvin Klein model,” she recalled in an interview with People back in 2012, the year the duo struck up a romance. “Then I was like, ‘I have to kiss him?’ I was so nervous and uncomfortable. I had the biggest crush on him,” she hilariously added. The pair married in 2015, and now share two kids together: daughter Wyatt, 7, and son Dimitri, 4.