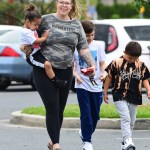 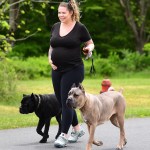 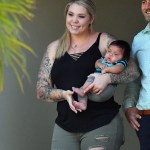 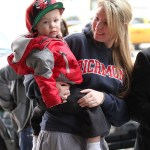 Kailyn Lowry took to Instagram to share a photo of her and her ex-husband Javi Marroquin happily posing with their seven-year-old son Lincoln during his football game and called the moment an ‘important’ one.

Kailyn Lowry, 29, and Javi Marroquin, 28, are putting their differences aside of their seven-year-old son Lincoln by coming together for his football games. The Teen Mom 2 star shared a new pic to her Instagram on Oct. 26 and it showed her and her ex-husband smiling while standing and posing with their little athlete and holding onto his shoulders. She was in a black graphic T-shirt, black leggings, sneakers, and a red baseball cap while Javi wore his military uniform and Lincoln wore his football uniform.

The proud mom included a caption with the pic that explained how “important” it is for her and the father of her child to still be there for their son despite no longer being romantically together.

“On @coffeeconvospodcast I talked about this picture. It was important to me to get a shot of the 3 of us for @lincmarroquin because I want him to always know that no matter how much Javi & I go through off the field, we turn the bullsh*t off when it comes to him. I think we’ve done a damn good job running our team this season & I cannot wait to see what we do next season! 🤩🏈,” she wrote while also adding the hashtags, #family #football #coffeeconvos #coffeeconvospodcast.

Kailyn’s pic brought on a lot of responses from her followers and they praised her for the precious moment as well as being a great parent. “I gotta say the way you blend your family is beautiful. thank you for showing them that they’re BROTHERS. nobody is half a person❤️🙌,” one follower wrote, referring to Lincoln and her other kids, Isaac, 11, Lux, 4, and Creed, 1. “i love this SOOOO much! best parents EVER♥️,” another wrote.

This isn’t the first time Kailyn and Javi, who were married from 2012 until 2017, posed with Lincoln for a pic at one of his football games. There was another pic of the three of them from a different day that was shared on Kailyn and Lindsie Chrisley‘s Coffee Convos podcast’s Instagram page. The latest episode had Kailyn opening up about the new football pic as well as co-parenting moments.