Amid reports of a possible impending split, Tori Spelling and husband Dean McDermott took their children to Disneyland this week.

Amid swirling divorce speculation, Tori Spelling and Dean McDermott emerged at an unlikely location on Wednesday, Oct. 20: Disneyland. The actress, 48, spent the day at the Happiest Place on Earth in Anaheim, California with her husband, 54, and their five children. The couple strolled through the park, their faces a bit sullen, with Liam, 14, Stella, 13, Hattie, 10, Finn, 9, and Beau, 4, as seen in photos HERE.

Neither Tori or Dean wore their wedding bands, but the Beverly Hills, 90210 alum did opt for Minnie Mouse ears. The family outing comes amidst reports that a separation might be on the horizon for the two after 15 years of marriage, one marked by admissions of infidelity on Dean’s part. A source recently told HollywoodLife exclusively that the marriage is “on the rocks.”

“They’re sleeping in separate bedrooms,” our source shared. “They’re not getting along and they haven’t for a long time. They’ve been telling those closest to them that things have been on the rocks for a very long time.” With the children sleeping in her bedroom and her busy work schedule, Tori has realized that “she can do this without” Dean, our source continued. 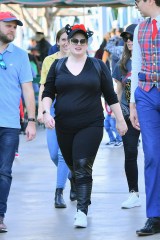 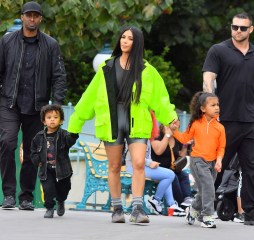 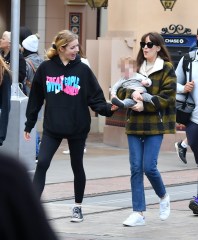 According to the insider, Tori has never truly been able to get past Dean’s 2013 affair. “She just doesn’t trust Dean anymore,” our source added. “She has never felt confident that he wouldn’t do it again. They’re both trying to keep their peace for the kids’ sake.” (HL has reached out to Tori and Dean’s rep for comment, but has yet to receive a response.)

Amid the reports of a divorce, Tori further fanned the rumor flames when she was spotted outside of a lawyer’s office in Los Angeles on October 18. She was photographed with a yellow legal pad that had the words “custody,” “support,” and “assets” scribbled on the pad. While Tori has not addressed the speculations, Dean somewhat has, calling the rumors “weird.”

While on the Feminine Warrior podcast on September 15, Dean said, “I don’t reply, you know, anymore. It’s just weird that people need to know. ‘What’s going on with Tori and Dean? She’s not wearing her ring.’ Why do you need to know that? How is that going to affect your day?”