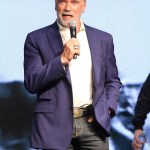 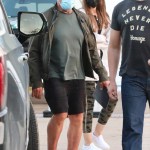 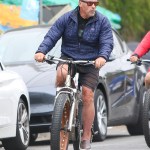 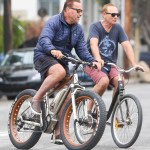 Arnold Schwarzenegger shared a new photo of himself posing with a much taller Shaquille O’Neal in Columbus and his sons poked fun at the height difference.

Arnold Schwarzenegger, 74, didn’t hesitate to joke about how much shorter he looks in a new photo with Shaquille O’Neal, 49, and his sons, Patrick Schwarzenegger, 28, and Joseph Baena, 23, joined in on the fun. The actor posed with the iconic basketball player when they greeted each other in Columbus and since the height difference was clearly obvious in the snapshot, which was posted on Sept. 25, he made sure to hilariously reference it in the caption.

“Great to see my friend @shaq in Columbus, although I don’t know why he always insists on standing on a 2 foot box when he’s with me,” Arnold wrote in the caption. “I’m here for the @arnoldsports, he’s here to do a fantastic DJ show. We used to share an office years ago and I love seeing his continued success.”

Shortly after Arnold share the pic, Patrick and Joe were quick to comment with their own cheeky words. “Kinda like the Twins poster!!” Patrick exclaimed, referring to the cover of his dad and Danny DeVito‘s 1998 film. “When is @shaq doing his guest posing routine?” Joe also asked. 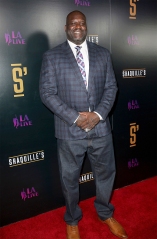 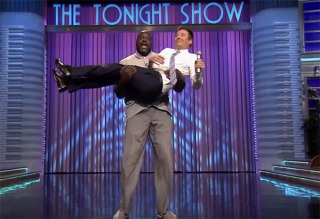 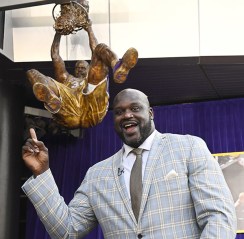 Fans also took to the comments section to share their thoughts on the epic eye-catching pic. “Arnold looks tiny for the first time,” one fan wrote while another called them “two champions.” A third wrote, “Love you, Arnold! But I never knew you were short! 😉❤️” and a fourth pointed out, “all I see are two legends.”

Before Arnold made headlines for his pic with Shaq, he did so for celebrating Patrick’s birthday last week. The proud dad posed in front of a cake with the birthday boy as well as Maria Shriver, and his other kids, including Katherine Schwarzenegger, Christina Schwarzenegger, and Christopher Schwarzenegger. Joseph was the only one missing from the pic but he was spotted spending time working out with Patrick earlier this year, proving their bond is growing.