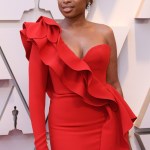 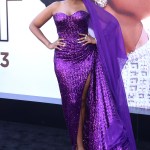 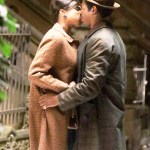 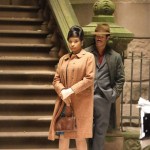 Jennifer Hudson attended the premiere for the highly-anticipated Aretha Franklin biopic on Aug. 8 dressed in a beautiful purple-sequined gown from Dolce & Gabbana.

Jennifer Hudson, 39, looked like an absolute queen on Sunday (Aug. 8) at the premiere of her new film, Respect. The Oscar winner, who plays Aretha Franklin in the highly-anticipated biopic, dazzled at the movie’s premiere at the Regency Village Theatre in Los Angeles. Jennifer wore a strapless purple-sequined dress from Dolce & Gabbana that had a six-foot long train as she posed for photos on the carpet. She finished off her stunning look with matching purple earrings and Christian Louboutin heels.

Fans have been anxiously awaiting Jennifer’s portrayal of the late “Queen of Soul” in Respect. Jennifer is expected to sing many of Aretha’s hits in the film, including the title track “Respect” and “(You Make Me Feel Like a) Natural Woman,” which was written by Carole King. The American Idol alumna also co-wrote an original song with Carole called “Here I Am” for the film. The full soundtrack is expected to be released on Aug. 13, the same day of the movie’s release.

Jennifer Hudson Through The Years 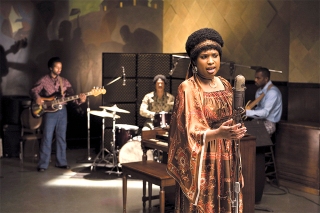 Jennifer filmed the majority of Respect in late 2019, and during that time she was seen in character in pics that were released. In the snapshots, which were taken on set, Jennifer looked just like Aretha with short hair and a tan trench coat. Those photos were followed by the official trailer of Respect, which was released in June 2020. In one clip, Jennifer can be seen impressively singing “Respect” while on stage. Other clips show various dramatic moments that depict Aretha’s struggles and rise in the music industry.

In a recent interview with Variety, Jennifer said that Aretha — who handpicked J-Hud to play the role prior to her death in Aug. 2018 — is “still with me, almost every day in some way.” Jennifer added, “Coming off of the film, while taking pictures with someone, I’m like, ‘Oh wow, I’m smiling like Aretha. Or, ‘That response was more Aretha-like.’ You identify little things like that in yourself that are still there.”