Ammika Harris took to Instagram to share several new pics and video clips of her one-year-old son Aeko perfectly riding on the back of a horse as she called him a ‘big boy.’

Ammika Harris is a proud mom! The beauty shared a post that included pics and video clips of her adorable son Aeko, 1, whom she shares with Chris Brown, 32, enjoying a horseback riding lesson on Aug. 7. The tot looks as happy as can be in the post as he’s helped to balance on the horse’s back while wearing a black vest, black helmet, and red sandals.

“Big boy. And he’s not even 2 yet,” Ammika captioned the post before her followers were quick to respond with sweet comments. “Aww he’s grown so much,” one follower wrote while another shared, “Omggggg 😍😍😍😍😍 Aeko is too grown for me baby , look at him he is too adorable.” A third pointed out how he looks like Chris with the comment, “Looking like his daddy 😩💞” and a fourth gushed, “Look at himmm.”

Ammika’s latest pics and video clips of Aeko come three days after he reunited with his sister Royalty, 7, during a family vacation. An incredibly cute photo of the younger brother holding her face was shared on Royalty’s Instagram page, which is run by her mom Nia Guzman. The big sis was smiling and sitting on a black bean bag while wearing a pink outfit in the pic and little Aeko was standing and wearing a white T-shirt with what appeared to be yellow cartoon bananas on it and blue jeans. 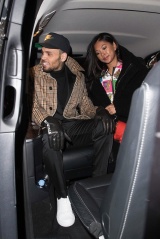 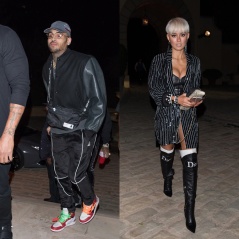 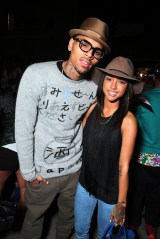 The pic took place in Greece and although it’s unclear whether or not Nia and Ammika were vacationing together, the latter also shared pics from Greece around the same time. Two of them showed her and Aeko sitting aboard a boat in front of rocks and water as the wind blew their hair around. She was wearing a bikini top and matching pants while her only child wore blue shorts. “My baby,” the doting parent captioned it.

Earlier this month, Chris’ mother Joyce Hawkins also shared a photo of her son playing with both Royalty and Aeko during the vacation. All three of them were dressed in swimwear as they got ready to jump into a pool. “MY HEART!!” the grandmother wrote in the caption.