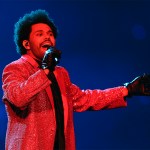 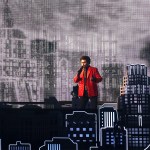 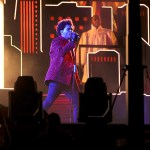 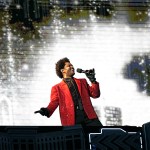 Dana Vaughns tells HL all about his experience as one of the backup dancers who performed at The Weeknd’s Super Bowl Halftime Show.

Dana Vaughns was hardly recognizable while performing as a backup dancer for The Weeknd‘s Super Bowl LV Halftime Show on February 7. The R&B artist was one of the many dancers dressed in the iconic red coat, white mask, and bandages wrapped around his head. HollywoodLife spoke EXCLUSIVELY with the “Girlfriend” singer as he explained what a “breeze” it was working with the Oscar-nominated star.

“It was definitely a little hectic, just on set,” the Never Have I Ever actor said. “I had a couple slight interactions with [The Weeknd] during rehearsals. Of course, we all have in-ears in so you can’t really hear anything. You’re kind of just looking at each other, putting the fist ups and let’s go.  From what I could gather from being around him, he’s definitely focused on his work. I like his calm nature, he didn’t get out of hand or stressed out. Even if he did, he didn’t show it which I respect as an artist, as well. It was a breeze on one of the biggest days.”

Despite the “rainy” and “cold” rehearsals, Dana was determined to do turn out an “amazing” performance. “I got called by the creative director, Charm (La’Donna) to do the Super Bowl. So, I went down there, we rehearsed in Tampa, Florida for about four days prior. It was rainy, it was cold. We rehearsed on the Yankees’ practice field in Tampa, which was cool. The weather was super crappy, but the performance was amazing. You definitely feel small in that stadium and just hope that you’re doing your job correctly so that the full picture was good.”

Meanwhile, the triple-threat star has been busy promoting his latest EP, Love So Different, which dropped on July 23. After teasing fans with the release of “LSD”, a synth-driven R&B single exploring the complexities of meeting the right love at the wrong time, Dana released his seven-track sophomore EP “Love So Different”. Inspired by a long-distance relationship, the project documents the singer’s journey of self-acceptance for things that he is unable to change, dissected beautifully across an array of trap-infused beats and soulful R&B melodies.

HL: Tell us about Love So Different and what can you share about the message behind the EP?

DV: “It took about eight months to come together and I wrote this during 2020. So, the COVID year, but my year honestly started off a little worse than even COVID treated me. So that pushed me into this place of where I needed to reassess where my life was, where my relationships were, and things like that. And then go on to the rest of 2020. I knew that I was going to get out of this slump, so I just wrote all these songs from a deeper level of self-love and just being very confident with where I’m going and how I want to feel and how I want to act. Instead of how I am feeling, how I am acting. So, I think everybody’s getting a little boost of encouragement to listen to.”

HL: Can you talk about the difficult time you went through in early 2020?

DV: “Yes, so I went through a breakup and then got with the rebound. And then broke up with the rebound. And then before I went back to my girl I was like, ‘Alright I need to reassess some things and really get my flow together.’ So that’s what that’s where it started, you’ll hear on track one, ‘LSD’ is the first track and it kind of says, ‘I need a break until I can move the right way.’ You know, I just need to reassess, and then after the first track, it’s all basically smiles and good times after that.”

HL: Why was the summer the perfect time to drop this EP?

DV: “Everything just aligned for me. I knew I wanted to drop it within the summer, just with the energy of the record and I had been working on it since last year so I felt like it was due time. In the summer it makes it easier to promote, travel, and things like that. But it also lined up, there’s a Netflix show going on for season two, I was in season one as well but it’s called Never Have I Ever. And once I realized that it was dropping in the middle of July I was like, ‘Okay perfect might as well line up the project with that.’ Also, I turned 23 this year so I was like, ‘Okay then we’ll just drop it on July 23.’ So there was kind of three separate meetings and things aligned so it just felt like the perfect time to drop it.”

HL: How did you feel about your latest single “Girlfriend” being featured on your show, Never Have I Ever?

DV: “Man, it was a big surprise. Lang (Fisher), one of the writers of the show told me that they were looking to put a dance in the last episode. He was wondering if I knew any certain dances or things and I said, ‘Hey, I actually have a record called “Girlfriend”, and it has a little dance to it or what not. So she took it back to production. They went over some things, and they weren’t able to use it for the dance section but they said we want to put it as the opening song of the prom scene. So I was like, ‘Okay that’s still a win, it came out of nowhere.’ Just to be considered, you know? To have something that I do outside of acting. To be involved with that was just a great opportunity. So thank you to Lang and Mindy (Kaling) and everybody at Netflix that approved it and yeah just to see it on there, man, it’s awesome. It’s kind of surreal.”

HL: How did you shoot the music video amid the pandemic?

DV: “Shooting the video was actually a great time. It was a hot summer day out here in LA. Everybody in the video I knew personally. Actually, all my videos that’s kind of how it goes and I’ll never really outsource models and things like that. I’m just blessed to know people in this industry. So, that was that was a really good feeling. I didn’t have to deal with anybody’s egos. I said before we got on set, I was like, ‘Yo, there’s eight girls here. Y’all gotta be supporting each other. We ain’t got no time for competitive stuff.’ So, it was just a good time.”

HL: How was filming during COVID? Were there any restrictions?

DV: “We had a COVID officer on set and we just had to make sure I didn’t go over capacity so we made sure we didn’t. I think only 14 people could be on set, including the officer or something like that. But we made it happen, we shot the video in four hours and it came out great.”

HL: What can you share about the current season of Netflix’s Never Have I Ever?

DV: “Season two is out right now, it’s on Netflix. And, I mean there’s lots of things, there’s new love romances, there’s, you’ll see me asking Shira to prom, people get hit by cars in this season, people are peeing on toothbrushes. Trent, he plays one of my friends in the show, there’s a line where he peed on my toothbrush, I was supposed to be in that scene. This is episode six but I was actually doing the Super Bowl with The Weeknd so I had to pick and choose my battles.”