Ariana Grande honored her late ex-boyfriend Mac Miller during her Fortnite concert — and fans are emotional.

Ariana Grande paid tribute to her late ex-boyfriend Mac Miller during her virtual Fortnite concert on Friday, Aug. 6. Following Travis Scott’s “Astronomical Concert” on the platform last year, Fortnite tapped the “Thank U, Next” singer, 28, for her own animated concert within the video game — and the singer honored her late ex in a celestial way.

During her set, Ariana performed her hit songs “7 Rings,” “Positions,” “R.E.M.,” and “Be Alright.” Toward the end, the singer performed “The Way,” her 2013 collaboration with Mac. During that performance in particular, Ariana’s avatar descended a stairway to heaven. Her fans experienced all the feels as the visual metaphor as the late rapper sung his verse in the background.

They play Mac Miller in the Ariana Grande concert on Fortnite 😭😭😭 pic.twitter.com/hg6mpiN3Lm

Their hit “The Way” played as the singer’s avatar walked up the stairway to heaven 😭😭💗💗💗 pic.twitter.com/hKUjkfB1Hg

Ariana and the late rapper began dating in 2016 after collaborating on some songs together, including “My Way” and her “Into You” remix. The two split in May 2018. Ariana confirmed the breakup on Instagram at the time and called Mac her “best friend” alongside a photo of the two. “This is one of my best friends in the whole world and favorite people on the planet,” she wrote. “I respect and adore him endlessly and am grateful to have him in my life in any form, at all times regardless of how our relationship changes or what the universe holds for each of us!”

“Unconditional love is not selfish,” she continued. “It is wanting the best for that person even if at the moment, it’s not you.” Mac, who had been open about his history with drug abuse, died in September 2018 from an accidental overdose at the age of 26. In an interview with Vogue in July 2019, Ariana reflected on his death. “It’s pretty all-consuming,” she said of the grief. “By no means was what we had perfect, but, like, fuck. He was the best person ever, and he didn’t deserve the demons he had.” She added, “I was the glue for such a long time, and I found myself becoming . . . less and less sticky. The pieces just started to float away.” 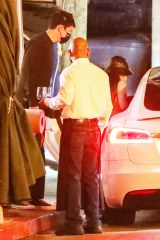 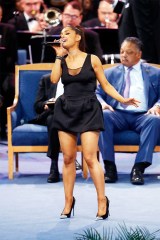 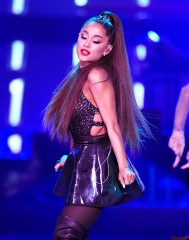 The Fornite concert isn’t the first time Ariana has paid homage to her ex-boyfriend. The late rapper is referenced in several of the singer’s songs, including “Thank U, Next” and “Just Like Magic.” Ariana is also known to play Mac’s music pre-show during her tours.