Gabrielle Union is ready for the weekend! The actress, 48, shared snapshots from her enviable Friday office on Instagram on July 30: the pool, rocking a white two-piece bikini with a knot on the top portion, and a cheeky bottom portion that showed off her rear. Gabrielle quoted a line from the 1967 coming-of-age novel The Outsiders and captioned, “Stay Gold Ponyboy.”

The Bring it On alum added, “Cheers To The Weekend Good People” complete with wave and sun emojis. Gabrielle also showed off her fresh new haircut, which she debuted last week on Instagram. The star traded in her signature long locks for a much shorter pixie chop for the summer.

“So, I did a thing,” Gabrielle captioned the grand reveal. “The movies always show women cutting their hair when all is lost but I wanted to know the feeling of making a change when things are gravy. It hits different and its foreign to me but I ❤❤❤ this new new.”

The star has been gracing Instagram feeds with a series of sexy snapshots that show off her figure. She recently shared photos in a sports bra and underwear set from Harlem American on IG earlier this week. Gabrielle captioned the post, “No gluten, no dairy. Except when I eat gluten and dairy.” 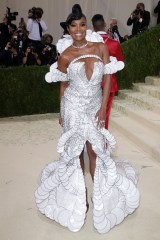 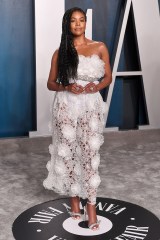 As for how she has gotten her body so damn good, Gabrielle is big on workouts that make her feel healthy. She offered insights on her routines in an interview with Women’s Health in February 2017. “I have a family history of diabetes, high blood pressure, and high cholesterol, and I know that can lead to an early death,” Gabrielle told the outlet.

“I want to be a vital and energetic part of my family for a long time, not to be big mama in a rocking chair in the TV room, or huffing and puffing just going up stairs. I work out not because I get off on it, but because I want to live!” She also revealed that she does Pilates.

“I’m not a morning person, but I have to work out early because of my schedule. The great thing about Pilates is that I can take out my annoyance from waking up early on the machines instead of human beings,” Gabrielle continued. “It’s for the greater good. My body responds to it, and I’m also more clear.”

Her best aging tip? “The ability to say no.” Gabrielle explained, “My best anti-aging tip is the ability to say no, no, and hell, no. We run ourselves ragged saying yes to every freaking thing, whether it’s to our family, spouses, or careers. I sleep eight hours a day and don’t let myself stress out.”