So, that’s what Hailie Jade Mathers’s boyfriend looks like. Eminem’s daughter posed with her love, Evan McClintock, for a rare selfie, and she shared how ‘happy’ she was to spend time with him.

“I rarely share my feed,” Hailie Jade Mathers captioned a July 18 Instagram post, “but when I do, I’m happy it’s with you.” The 25-year-old daughter of rapper Eminem was referring to Evan McClintstock, who made a rare appearance on Hailie’s Instagram. In the photo, the two are lounging on a balcony in the summer sun. Hailie is sporting a tan dress with cut-outs, and a wide-brimmed hat to help keep the UV off of her face. Her boyfriend sported a t-shirt and a beard that was, for the most part, pretty well kept. It was a perfect picture of young love, and fans remarked on how “beautiful” they looked together.

“Aww it’s nice to see you happy hails.” “Lucky man.” “Beautiful Hailie.” “You are gorgeous together!” However, some fans pondered the reality of dating Slim Shady’s daughter, and the pressures Evan must be under. “Don’t hurt her, whatever you do. Your life will go down in history.” “Imagine bringing your man home just to meet Shady at the door.” “He must be so afraid to do something wrong when being around her father.” “Boy don’t you ever hurt hailie or shady is will rockabye you broski.”

Eminem made reference to Hailie’s boyfriend in 2020, while appearing on Mike Tyson’s podcast, Hot Boxin’ podcast. The “Godzilla” rapper took pride in the fact that Hailie graduated from college with a 3.9 GPA and “no babies. She has a boyfriend, but she’s doing good,” he said. “She made me proud for sure. … “I have a niece that I have helped raise, too, that’s pretty much like a daughter to me, and she is 26, and I have a younger one that’s 17 now. So, when I think about my accomplishments, that’s probably the thing I’m the most proud of is that — is being able to raise kids.”

Eminem Pictures -- Photos Of The Rapper At Lollapalooza & More 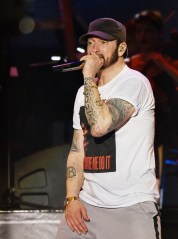 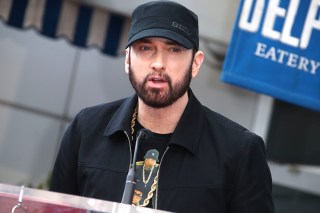 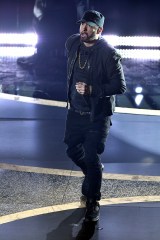 Evan first appeared on Hailie’s Instagram in 2016 (h/t Just Jared). The two snuggled close while celebrating her birthday. “Couldn’t have asked for a better 21st birthday celebration (or a better guy to have by my side).” Since then, she has made quite a name for herself on Instagram, accumulating over 2.1 million followers on the platform. In the post before her picture with Evan, she rocked a crop top and jeans while sipping a margarita. ““if you aint drinkin cocktails on the patio then where tf you aaaaaht,” she asked.