Adele turned heads when she was spotted sitting courtside at game five of the 2021 NBA Finals in a fashionable long coat and matching leggings at the Footprint Center in Phoenix, AZ.

Adele, 33, looked incredible during a rare public appearance on July 17! The singer showed up to the NBA Final game between the Milwaukee Bucks and the Phoenix Suns while donning a long tan and black patterned jacket over a black top and black fitted leggings. She also wore black sandal-like heels at the Footprint Center in Phoenix, AZ, where the fifth game took place, and had her long locks down. Check out the pics of Adele HERE!

The beauty, who has reportedly lost around 100 pounds, kept safe with a black face mask during the outing and ended up sitting courtside as she watched the players shoot hoops and get cheered on by the crowd. She was also reportedly seated next to Rich Paul, LeBron James‘ agent during the fun game.

Before Adele’s latest headline-making appearance, she had fans talking when she posted a photo of herself to commemorate England’s great run at the UEFA European Football Championship (Euro Cup) last week. In it, she rocked a red England jersey and black leggings, and had her nails painted to look like the English flag. “You did us so proud! You brought our game home and brought us all together,” she wrote in the caption. 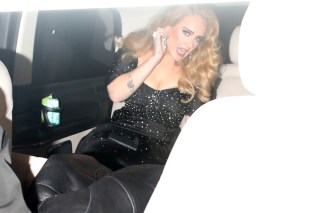 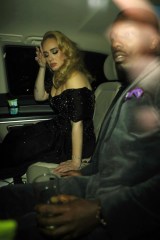 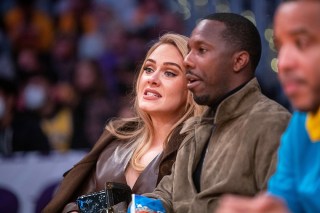 Just a couple of months ago, in May, Adele also made headlines when she posted a series of photos of herself looking happy while celebrating her 33rd birthday. They included a makeup-free black and white portrait in which she was giving a serious look to the camera and one of her thrillingly dancing and twirling while wearing a stylish maxi dress with a tie-dye pattern. She also included one that showed her with her arms stretched out while taking a dip in water.

It’s always wonderful to see Adele living her best life! We look forward to seeing what other outings she has and fashionable looks she shows off in the near future!