Bachelor stars Ashley Iaconetti, 33, and Jared Haibon, 32, recently revealed they’re pregnant and expecting their first child together. And now, they’re spilling all the details on what they’re doing to get ready for their baby. From morning sickness to pregnancy cravings to potential baby names — the couple, who wed in 2019, didn’t hold back during an EXCLUSIVE interview with HollywoodLife on July 16. Check it out below.

HOLLYWOODLIFE: First of all, how are you feeling? And congrats!
Ashley: Thank you so much. I’m not feeling great, but getting through!

HOLLYWOODLIFE: How far along are you right now?
Ashley: Ten-and-a-half weeks.

HOLLYWOODLIFE: How hard was it to keep your pregnancy a secret?
Ashley: Mostly I would say it was hard because I haven’t been very lively and I haven’t been able to do much besides do anything but be on the couch which doesn’t make for the most exciting Instagram content. I feel like I’ve had to hide a lot of myself. I feel like it’s weird to say but part of our job is to document our life and honestly for the past 5 weeks my life has just been being on the couch.
Jared: When people are like, “Where’s Ash?” A lot of times I’ve had to go to things by myself because Ashley hasn’t been up to it and people will be like, “Where’s Ash?” and I’m like, “Oh, she’s sick.” Of course I’m not going to tell them because I want to make sure all of our friends and family know before people that I’m not as close with so it’s been like, “Oh, she’s not feeling well.”
Ashley: It’s been awkward and I don’t like lying. I’m the worst liar. 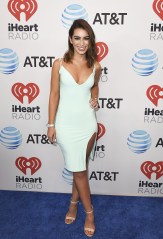 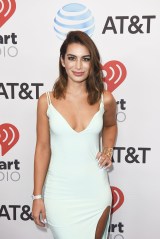 HOLLYWOODLIFE: Have you had any cravings yet?
Ashley: I don’t think I’d call them cravings as much as I call them non-aversions, kind of like, what do I feel like I could eat right now.
Jared: She was craving chocolate cake at 9pm and we had no chocolate cake in the house so I went to the grocery store and got her two different kinds to make sure I didn’t get the wrong kind. One was like a chocolate mousse and one was a chocolate chocolate so I got them both.
Ashley: There’s something about flour-y chocolate that really does me well because chocolate chip pancakes are another thing that I have 5 out of 7 days. It’s the one thing I haven’t thrown up yet.

HOLLYWOODLIFE: Do you guys know the sex of the baby yet?
Jared: We don’t know but we have a doctor’s appointment this week and we’ll find out the sex of the baby which is crazy. I’ve been going so back and forth. My initial gut was it’s definitely a boy, but now, I don’t know.
Ashley: I think it’s a boy still. I want a girl, but I’m telling myself it’s going to be a boy so I don’t get my hopes real up. I’m going to be happy with of course anything.
Jared: As long as it’s healthy.

HOLLYWOODLIFE: Do you have names picked out for both genders yet?
Ashley: Just for a boy.
Jared: Ashley’s had this name for 15 years.
Ashley: I had a girl name picked out too but Jared doesn’t like it.

HOLLYWOODLIFE: How are you guys preparing? Are there any ‘Bachelor’ Nation people that you’re reaching out to for advice?
Ashley: Jade got me some real nice sweatpants. They came in the mail. So sweet. She’s like, “I love these because they stretch with you over time and they kind of make it look like you got yourself together.” Jade just really has been there for me. I’ve always thought of her as being super strong and mother nature and somebody who wasn’t phased by all of this.

HOLLYWOODLIFE: Does labor and delivery scare you?
Ashley: It used to scare me way more than it does now. I don’t know why that is. My dad’s an anesthesiologist so I’m an epidural girl. My friends who have had epidurals make me feel a lot better. I used to be a little more scared of it than I am now. Now I’m just like, “I’d like the baby out of me. Can I be there?”

HOLLYWOODLIFE: What was it like finally finding out that you were pregnant and what was it like when you did find out?
Jared: We found out on Memorial Day. Ash took the pregnancy test without telling me. Her boobs were hurting and she just felt like maybe she was pregnant.
Ashley: I also didn’t think it would happen that quickly.
Jared: We were off on her ovulation schedule. We had been trying for 7 months at this point and we figured it wasn’t happening this month but she took a test anyway because her body was feeling a little weird, her boobs hurt and so she thought, “I’ll just try it out.” She took the test. It came back positive.
Ashley: It was like a faint line positive.
Jared: She’s like, “Jared, funny story. I took a pregnancy test. There was a second line that came up. It was quite faint.” And I said, “Oh, it’s probably nothing.” So she took another one and the second line came back. The next day, she didn’t get her period and we took a pregnancy test that night, the Clear Blue one which is 99%. And that came back positive again and that’s when we were like — We’re pregnant! Three positives in three days, no period, boobs hurting. I was like, “Let’s just confirm,” and then I saw the ultrasound and there was a baby in there.

HOLLYWOODLIFE: Does being a dad scare you, Jared?
Ashley: Jared’s the least scared person about being a dad. It’s very natural to him. I think he’s going to fall into that role easier than I will. He’s far more selfless than me.
Jared: It doesn’t scare me. I have the most incredible father. I’d like to think I’ve learned a lot from him. It’s nerve-wracking, the idea of raising a child and not screwing him up. I’ve seen some of my friends do it and they’re in the same boat as us. We’re all just taking it one day at a time and trying to do the best that we can. When I’m looking at how I’m looking at this, but I’m very excited to become a dad. I don’t know. I’ve always wanted to be a father and so it’s weird to think now it’s happening. It doesn’t feel any differently.

HOLLYWOODLIFE: Do you plan on being super hands on? Baths, bottles, the whole 9 yards? Have you ever held a baby?
Jared: Oh yeah, I’ve held many of babies. I used to volunteer at a children’s hospital and I worked on the baby floor so I got to hold babies back then which is great. I still am an idiot when it comes to carseats and all that jazz so I really need to learn how to properly put a carseat in or how to put together the mamaRoo, so that’s a little intimidating. I’ve got to get handy.
Ashley: Jared’s going to be waking up in the middle of the night. I’m not concerned about his helpfulness. He’s the most helpful husband in the entire world.

HOLLYWOODLIFE: You’re even going to change dirty diapers?
Ashley: Absolutely! I’m not concerned about any of that. He might do more than me!

HOLLYWOODLIFE: What about parenting role models? Sean and Catherine? Jade and Tanner?
Ashley: I think our parenting role models are our sets of parents, but if we had to pick one from Bachelor Nation, yeah, Jade and Tanner are our best friends and they have their hands full. Both of them are so loving and nurturing but Jade really is everything you’d really want in a role model for a mother. She’s just so hands on and everything revolves around them.

HOLLYWOODLIFE: What will you tell your child about how you guys met and the show?
Jared: They’re never watching Bachelor In Paradise. They’re like, “Dad is an idiot. Dad is stupid! Don’t do what dad did!”
Ashley: I don’t care. One day it’ll be really funny for them to watch.