The former ‘Glee’ star Lea Michele shared a beautiful photograph of Cory Monteith, her former boyfriend, on the eighth anniversary of his passing.

Lea Michele, 34, paid tribute to her Glee co-star and former boyfriend Cory Montieth on Tuesday July 13 on her Instagram Story. Lea posted just a black-and-white photo of Cory, wearing a varsity jacket, as he waves. It’s a great photograph to honor the singer and actor on the eight-year anniversary of his death. She also posted a red heart emoji in the bottom corner of the post.

Cory passed away unexpectedly at 31-years-old in 2013. He was found dead in his hotel room at the Fairmont Pacific Rim Hotel in Vancouver, Canada. He died after using heroin and alcohol, and his death was deemed to be accidental. He and Lea had been dating for nearly about a year and a half, after first getting together in 2012. Following his death, initial tributes poured in from celebrities and his fellow Glee cast members.

In the years since Cory’s death, Lea has regularly paid tribute to her former boyfriend and co-star on her social media. In the year right after Cory passed, she wrote a sweet message in a since-deleted tweet. “We hold you in our hearts today, and every day we remember your smile,” she said, via Us Weekly. She continued the tributes, even after marrying Zandy Reich in March 2019. Some of the tributes have been less specific, including photos of sunsets and gorgeous views. “The light always remain,” she wrote in 2019. 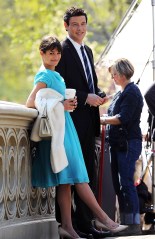 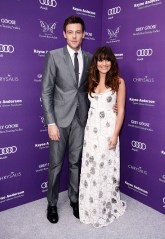 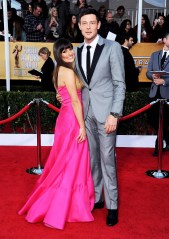 Cory’s death wasn’t the only tragedy that struck the Glee cast. In July 2020, Naya Rivera went missing while on a boating trip with her son Josey. The actress’s body was recovered on July 13, exactly seven years since Cory died. Fans were incredibly saddened by Naya’s sudden death and the eerie coincidence that the body was found on the anniversary of Cory’s death. Lea also paid tribute to Naya on the one-year-anniversary of her death on July 8. She took a similar approach, where she shared a black-and-white photo of Naya singing the hit song “Don’t Rain On My Parade” on her Instagram Story. Besides the photo, she included a dove with an olive branch emoji.