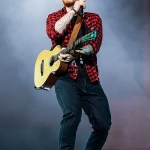 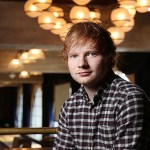 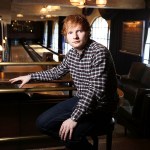 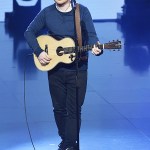 Ed Sheeran showed off a happy and healthy new look while attending a soccer game with David Beckham on June 29.

Ed Sheeran, 30, looks like he’s got a great handle on fatherhood, as he seemed to be in good spirits while attending the England vs. Germany UEFA European Championship soccer game on Tuesday, June 29. He even looks a bit slimmer, which makes sense given the fact that he told James Corden on June 28 that he’s “healthier than I’ve ever been,” nine months after his wife, Cherry Seaborn, 29, gave birth to their first daughter. Lyra.

At the game, Ed cheered on his home team of England alongside some fellow British celebrities: singer Ellie Goulding, 34, her husband Caspar Jopling, soccer great David Beckham, 46, and David’s son Romeo. Ed wore a slim blue bomber jacket over what looks like a white English soccer jersey and a pair of black slacks. His wife wore a matching white t-shirt and blue jeans.

Despite being the most casually dressed stars in their section, Ed and his wife seemed to get along swimmingly with the other celebrities. In some photos, Ed looked like he was cracking jokes with David, who was wearing a dapper looking suit.

In the Late Late Show interview, in which Ed spoke about being healthy, he shared some of the lifestyle changes he’s made since Cherry gave birth to Lyra. Besides staying home and working on his much-anticipated fifth studio album, the “Bad Habits” singer said that he’s been exercising and “instead of going to bed at six, [he’s] getting up at four” to take care of the baby. He also said he “feels like a human being,” after making those changes. Watch the full interview with James Corden above!

Even though Ed looks great after making some adjustments, his daughter hasn’t totally adapted to having a musical dad just yet. He told James that she can be a little shocked if he “sings too loudly.” Ed did say that his daughter wasn’t his “biggest fan” and “just cries” when he plays her new songs in a May 29 interview with Radio 1’s Big Weekend, but it sounds like he found a happy medium, telling the late night host that he plays the baby girl quiet Irish folk music.