In honor of Pride Month, Michaela Kennedy Cuomo, 23, posted a selfie of herself with a background made up of rainbow flags and a rainbow sky. She also wrote a lengthy caption, in which she confirmed that she identifies as bisexual. “If #bi weren’t censored, maybe I would have accessed information and tools that as a bisexual person I would need to protect myself from increased rates of sexual victimization, homelessness, hunger, unemployment, hate crimes and mental health challenges,” Michaela wrote.

The 23-year-old, who is the daughter of Kerry Kennedy and New York Gov. Andrew Cuomo, also said she is “proud” of her “queer identity” and gave a shoutout to those who paved the way for her to feel that way. “I stand indebted to the activists who fought for my right to love and happiness,” Michaela wrote. “I stand with a helping hand outreached to those finding their way from under socially constructed boxes to emerge from the closet. I’m standing with you.” 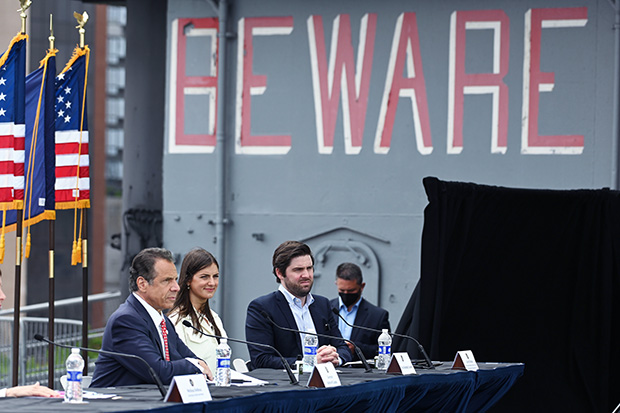 Michaela’s post also gave a shoutout to those on “the whole spectrum of sexualities.” “To those who are contending with the compulsive heterosexuality our society force feeds us and innate attraction beyond cis het folks, please know you are not alone,” she wrote. “To those who have yet to claim their sexual identity due to fear of physical, psychological or financial safety, please know that you are unconditionally worthy of love and support. To the questioning folks, know that we all reserve the right to change our minds or evolve at any time. There is nothing wrong with you for not fitting into a limiting, socially constructed box.”

Michaela is Andrew and Kerry’s youngest daughter — her older sisters are Cara Kennedy and Mariah Kennedy. This appears to be the first time that Michaela has come out as bisexual, although she did celebrate Bisexuality Visibility Day with a tweet in September 2020.

Related: Carl Nassib: 5 Things To Know About 1st Active NFL Player To Come Out As Gay