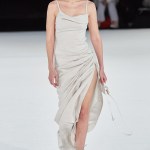 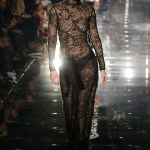 Gigi Hadid, 25, kept her 2020 pregnancy fairly quiet — but just posted some sweet bump photos to her ‘gram! The model sported a BOODY bra as she showed off her then-growing bump in the Polaroid images, taken last May. “this week, last year,” she simply captioned the May 27 post. She threw on a striped oversized button down over the black bra, paired with what appeared to be a silk pair of shorts.

Her millions of fans, friends and family members showed some love for the cute photos in the comments. “by YER sister….babunuuushiiiiiiiii,” sister Bella Hadid, 24, affectionately wrote, seemingly taking credit for the snaps. “My girls,” older sister Alana Hadid, 35, posted, while dad Mohammed Hadid added, “um-khai.” Khai, of course, is the Arabic name Gigi and boyfriend Zayn Malik, 27, chose for their daughter.

The Maybelline model confirmed she was expecting her first child to Jimmy Fallon via a virtual appearance on his late night show. At the time, she was in quarantine on her family’s farm in Pennsylvania along with Zayn, Bella and mom Yolanda Hadid. She kept her bun hidden from the world until an Instagram live that August, as she sported a button down green checkered top — followed by a crop top selfie showing her growing bundle of joy!

“From about 27 weeks,” she wrote in Sept. 2020, which was just days before she gave birth! “Our baby girl is here, healthy & beautiful…to try put into words how i am feeling right now would be an impossible task,” Zayn wrote alongside a black-and-white photo of the baby’s hand in his. “The love i feel for this tiny human is beyond my understanding. Grateful to know her, proud to call her mine, & thankful for the life we will have together x,” the One Direction alum added.

The model didn’t waste any time getting back to work, appearing on the March 2021 cover of Vogue in a floral Prada dress. “I know that I’m not as small as I was before, but I also am a very realistic thinker,” she said of her post-baby body to the magazine. “I straight up was like, ‘Yeah, I’ll shoot a Vogue cover, but I’m obviously not going to be a size 0,’ nor do I, at this point, feel like I need to be back to that,” she said of accepting the cover offer.