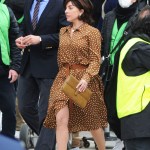 Lady Gaga broke down in tears as she recalled her sexual assault experience that left her pregnant after being ‘locked away in a studio for months,’ which led to ‘full-on pain’ and trauma years later.

“I was 19 years old, and I was working in the business, and a producer said to me, ‘Take your clothes off,'” Lady Gaga shared in the premiere episode for The Me You Can’t See, which is Oprah Winfrey and Prince Harry‘s Apple TV+ unscripted series about mental health dropping on May 21. The 32-year-old pop star went on to describe her horrific experience of sexual assault that left her impregnated, and how the ordeal manifested into actual physical pain years and an eventual “psychotic break.”

“I said no. And I left, and they told me they were going to burn all of my music,” Lady Gaga — whose real name is Stefani Joanne Angelina Germanotta — continued. “And they didn’t stop. They didn’t stop asking me, and I just froze and I—I don’t even remember.” She broke down in tears at this point in the interview, but did not wish to disclose names.

“And I will not say his name. I understand this Me Too movement and I understand people feel real comfortable with this, and I do not. I do not ever want to face that person again,” she explained. While she did not have to face the producer again, Lady Gaga still went on to experience the same pain from the assault years later.

The pain changed Lady Gaga. “I had a total psychotic break, and for a couple years, I was not the same girl,” she revealed. “The way that I feel when I feel pain was how I felt after I was raped. I’ve had so many MRIs and scans where they don’t find nothing. But your body remembers.” At this point in the interview, the screen also showed headlines about her cancelled Joanne world tour dates in 2018, suggesting that the psychotic break took place during this time (per The Daily Beast).

For the next two and a half years afterwards, Lady Gaga eventually learned how to cope with her trauma — but it wasn’t easy. “Even if I have six brilliant months, all it takes is getting triggered once to feel bad. And when I say I feel bad, I mean I want to cut. Think about dying. Wondering if I’m ever going to do it,” she sadly shared. However, she clarified, “I learned all the ways to pull myself out of it.”

Lady Gaga’s experience with sexual assault led her to create the 2013 song “Swine,” which she revealed in a 2014 SiriusXM interview with Howard Stern. She also revealed that her abuser was 20 years older than her. The singer was eventually diagnosed with post-traumatic stress disorder and fibromyalgia and explained the latter condition to Vogue in 2018, telling the magazine, “For me, and I think for many others, it’s really a cyclone of anxiety, depression, PTSD, trauma, and panic disorder, all of which sends the nervous system into overdrive, and then you have nerve pain as a result.”