Heidi Klum has stunned in a shimmering, red outfit for an appearance on Jimmy Kimmel Live! on May 11. The 57-year-old America’s Got Talent judge rocked a glittering ensemble as she arrived on the set of the talk show, to promote the upcoming 16th season of AGT. In an Instagram video, the German supermodel opted for a figure hugging ensemble featuring a red sheer top, matching metallic pants, and towering heels.

She completed the statement look with a black blazer featuring gold zipper detailing, while she styled her long blonde tresses in loose waves. In the clip, Heidi posed in front of the entrance doors to Jimmy Kimmel‘s set, before strutting like the supermodel she is down the alley way behind the El Capitan theater. Heidi then twirled for the camera and offered a small wave. Fans of the blonde beauty would know she’ll return to screens as an AGT host on June 1, alongside Simon Cowell who has recovered from back surgery.

During her TV appearance, Heidi revealed that her husband, Tokio Hotel rocker Tom Kaulitz, 31, gave her a very unique gift on her birthday last year. “It’s the German wall! It’s the Berlin German Wall,” Heidi shared, showing off the chunk of the Berlin Wall that now sits in her front garden. “My husband was actually born in East Berlin, and I’ve been there many, many times. Obviously, I love Germany. This is where I’m from even though I’ve been here longer than I’ve been in Germany. So he gave this to me for my birthday.” 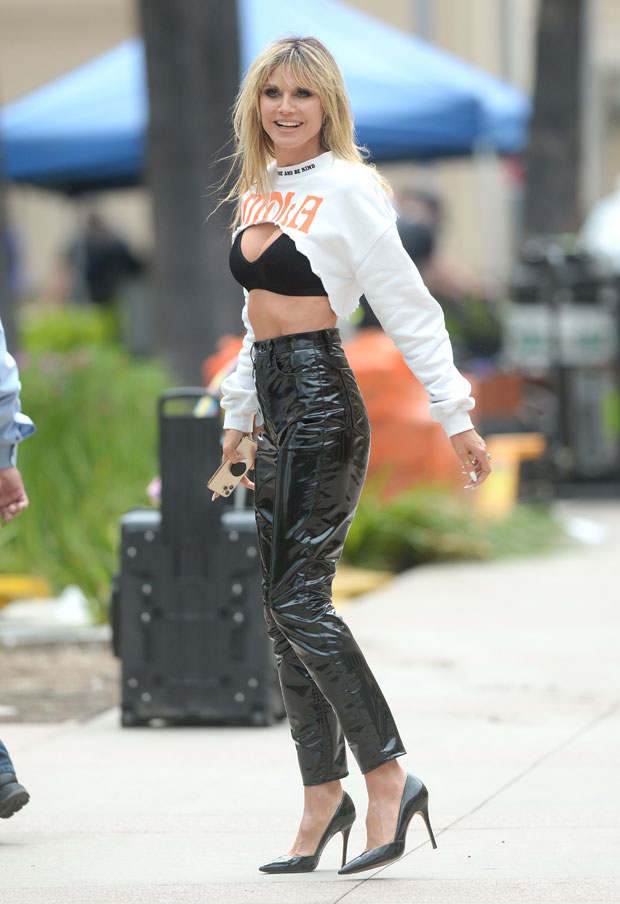 The piece of the wall was shipped from Germany and placed into her garden by a crane. “When you guys fight, do you sit on opposite sides of the wall?” host Jimmy Kimmel asked. “No, but this is good, I like it … I loved it. It’s beautiful. I mean it’s beautiful that it’s broken and it’s not standing there anymore doing what they intended it to do, so I love it as an art piece in the garden.” The Berlin Wall was built to separate the city in 1961, and was famously torn down in 1989.