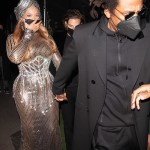 Talk about a power couple! Beyonce has stunned in a black and red tweed set with matching heels, while celebrating her 13th wedding anniversary with Jay-Z.

Trust Beyonce to pull out an incredible anniversary look! The Grammy winner was a total knockout in a black and red tweed top with matching short shorts. The 39-year-old songstress shared the series of stunning new snaps to her personal website on April 10, after celebrating her 13th wedding anniversary with Jay-Z tie on April 4. “Sin City,” she captioned the pics, as she accessorized with oversized sunglasses, a silver bedazzled choker, diamond hoops earrings and bright, shiny buttons on her top. She also donned a pair of red velvet heels with bows around the ankles.

Her husband Jay-Z could be seen in one snap, rocking a long sleeved shirt sweatshirt from the late artist Noah Davis‘ The Underground Museum in LA. He also rocked a gold chain and dark sunglasses as he wrapped his arm around the “Crazy In Love” singer. Bey and Jay share three beautiful kids: daughter, Blue Ivy Carter, 9, and twins Rumi and Sir, 3. Bey’s mom Tina Knowles recently proved that Blue and Bey looked like twins when they were the same age! She took to Instagram on April 3 to share an adorable throwback snap of the Grammy winner when she was in elementary school.

“Missing my beautiful baby this morning ? at Saint Mary’s looking like I “i might look like a little Angel but I got something up my sleeve,” she captioned the photo, which showed Bey in a school photo wearing a white collared top, plaid overalls and an oversized black bow in her hair. She offered the camera a sweet smile and had a cheeky expression on her face. Oscar winner Viola Davis commented, “Wow!!!! I thought this was Blue. Beautiful pic,” while another fan wrote, “Is this Beyoncé or Blue?”

It’s been a busy few weeks for the Carter family, with both Bey and Blue winning big at the Grammy Awards back on March 14. Blue won her first-ever Grammy Award for Best Music Video as she was featured on her mom’s “Brown Skin Girl,” which took home the top prize. Meanwhile, Beyonce won FOUR awards at the show, bringing her total Grammy wins to 28 and setting the record for the most that ANY artist has ever won.