Snake and Selena first teamed up in 2018 for their smash hit, “Taki Taki,” a collaboration that featured Cardi B and Ozuna. The two referenced that collab when teasing the new song on Feb. 25. Both Sel and Snake shared an 8-bit teaser that referenced the volcanic music video. In the teaser, Sel and Snake are retro video game sprits, alongside versions of Cardi and Ozuna. Selena and the DJ then break off from the foursome, hit a “heart” block to pick up a pair of golden hearts…that they drop into an active volcano. Considering Selena’s first cut from Revelación had something to do with love, fans were left speculating what this new song could be about.

“So, it didn’t take me long to really feel the mood of the music,” Selena said about singing in Spanish when speaking to Apple Music’s Zane Lowe in January, right after dropping “De Una Ves.” “I think Spanish came very naturally to me. So there were obviously moments where there were specific timing, there were cues that were so quick that I had to learn that were challenging, but as far as being able to say, and speak, and roll my Rs, and do all of that, that’s already in me, thank goodness. So it had its moments of being really smooth, and then just I have a few things where I’m kind of speeding rapping Spanish, which is cool.” 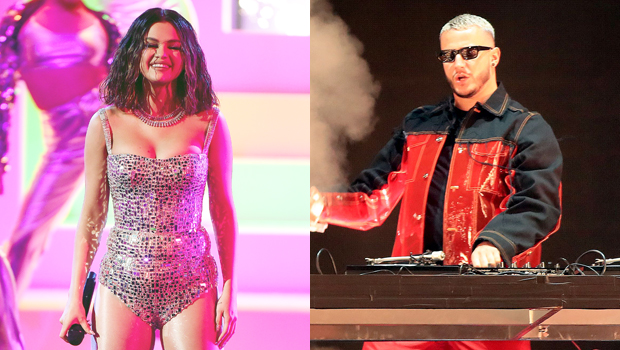 “I was named after Selena Quintanilla,” she added, referencing the late Tejano music icon. “So this is something that I think, I feel the opportunity to create something like this is really huge. And I think that I loved how my parents just immersed me in all types of music. I mean, there wasn’t anything. At first, it was Tejano music, really, that I liked to listen to. And then that’s when I noticed the difference in how people mix in R&B with Spanish, or pop, or club music. It’s really, really cool.”

Related: Selena Gomez & More Stars With Semicolon Tattoo, Plus Ideas For Your Own

“You know what’s funny,” said Selena, “is I actually think I sing better in Spanish. That was something I discovered. It was a lot of work, and look, you cannot mispronounce anything. It is something that needed to be precise, and needed to be respected by the audience I’m going to release this for. Of course, I want everyone to enjoy the music, but I am targeting my fan base. I’m targeting my heritage, and I couldn’t be more excited.”