Model/actress Cara Delevingne is so gorgeous she could pull off any hair color or style. She just traded in her blonde locks for a dark, ash-brown shade. The 28-year-old debuted her new look via an Instagram post on Feb. 22, showing she also got a mid-chest shag cut to change up her normally straight and even long tresses. The new color matched Cara’s famed heavy dark eyebrows perfectly, and Cara’s green eyes really popped with the brunette color.

Cara wore a coral colored sleeveless V-neck halter in the selfie. She had on next to no makeup, except for a touch of lipstick that was close in color to her top. Openly bisexual Cara had rainbow flecks of color drawn underneath her eyes, as well as a tiny choker which also featured the rainbow pride pattern.

The Carnival Row star wrote in the caption, “Blondes have more fun, but brunettes…” and her celebrity friends went wild for the photo. Dark haired pal Anne Hathaway finished Cara’s sentence by commenting that brunettes “…get it done” along with a smooch face emoji. Kate Bosworth called her a “Cutie,” while Rachel Brosnahan cheered “Yesssssssss,” with a flame emoji for Cara’s new look. Actress Bella Thorne was all bout the rainbow makeup, as she gushed, “Ahhh the eyes!!!” 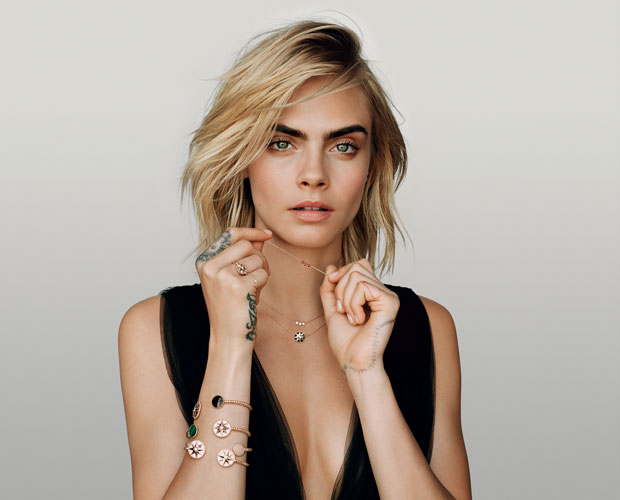 Cara headed to West Hollywood’s Mare Salon to get her total hair makeover. Owner Mara Rozak shared the same photo and wrote in the caption, “When you get a call from this Unicorn of a human wanting a change #shagcut it up! @caradelevingne I LOVE this hair almost as much as I love YOU!” Mara noted she was in charge of the shag, while the salon’s colorist Jamie Levin gave Cara her new brunette hue. Celebrity makeup artist Molly Stern was in charge of giving Cara her rainbow eyes. With Cara’s photo getting nearly two million likes in just six hours, the team really nailed it their job. It also helps to have such a stunning client to work on.