After four long years of playing then-President Donald Trump on Saturday Night Live, Alec Baldwin is giving the concession speech that Trump never gave to current President Joe Biden. The 62-year-old actor appeared on actress Anne Heche and friend Heather Duffy Boylston‘s podcast Better Together with Anne and Heather on Feb. 11, and got back into character to deliver an abbreviated concession speech to Biden, which is something Trump himself never did after losing the Nov. 2020 presidential election. You can see the video here.

Since Alec was at home doing the podcast remotely, he wasn’t fully done up as Trump with the wig and orange tan. Instead he just provided the voice and mannerisms. “I think that if he gave a concession speech, it would be,” Alec began before going into his Trump impression, saying “I didn’t lose, everybody knows, we all know that. I didn’t lose. But this only creates another opportunity for me to come back and conquer again and make America [great].

Alec continued, “Joe Biden, sleepy Joe, creepy Joe, grabby Joe, is going to bring this country down into the cesspool again. He’s gonna fill up the swamp and I’ll ride in again and save America and make America great again. In the meantime, hasta la vista America.” 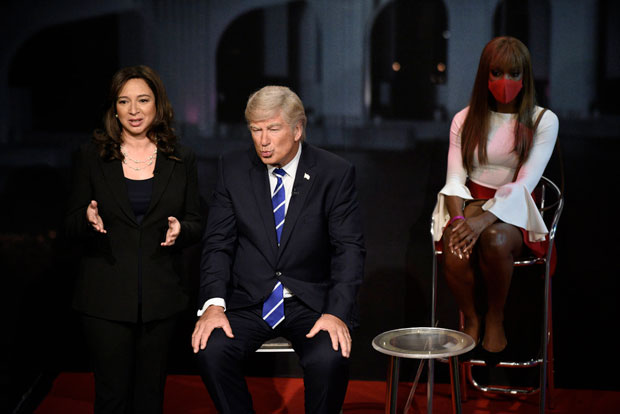 Since Trump was acquitted in his second impeachment trial after inciting the Jan. 6 riot on the U.S. Capitol building that left five people dead, he is able to run again for president in 2024. Though Trump likely would need to do it as a third party candidate, after angering top GOP members. He released a lengthy diss message to Senate Minority Leader Mitch McConnell on Feb, 16 calling him “a dour, sullen, and unsmiling political hack,” even though Mitch voted to acquit him and had steadfastly carried out Trump’s agenda while he was POTUS.

Trump never gave a concession speech to Biden, even after the 78-year-old was declared the winner four days after the Nov. 3 presidential election, after all of the ballots in close states had been counted. The 74-year-old continued to claim that the election was “rigged, and “stolen,” despite no evidence to prove any election fraud. The closest the petulant ex-POTUS came to admitting defeat — something he still hasn’t done — was in a Jan. 7 statement where he finally said that “a new administration will be inaugurated on January 20th,” without naming Biden.