Celebrities have taken to Twitter to express their fury after supporters of President Donald Trump stormed the US Capitol on January 6. Senators and Congressmen inside the building, along with Vice President Mike Pence, were forced to evacuate as hundreds of protestors broke past police and security barricades, attempting to get into the Senate chambers. The Capitol’s campus went into lockdown shortly after rioters broke in. Here’s what the stars had to say about the attack.

Selena Gomez, 28, posted an open letter address to executives at America’s largest social media platforms, including Facebook founder Mark Zuckerberg, YouTube CEO Susan Wojcicki and Twitter co-founder/CEO Jack Dorsey. “Today is the result of allowing people with hate in their hearts to use platforms that should be used to bring people together and allow people to build community,” the Rare beauty founder and mental health activist posted on Jan. 6.

She went on to name Mark, Jack, Susan, their respective companies and others, including Lean In author Sheryl Sandberg. “You have all failed the American people today, and I hope you’re going to fix things moving forward,” she finished the tweeted post. She also shared the powerful message to her Instagram story. Prior to Selena’s post, Donald Trump was suspended from Twitter for 12 hours with three of his tweets deleted by the platform. 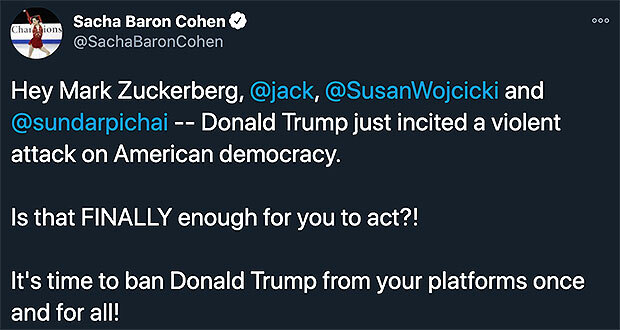 Sacha Baron Cohen took to Twitter to tweet to Facebook CEO Mark Zuckerberg, Twitter CEO Jack Dorsey, YouTube CEO Susan Wojcicki, and Google CEO Sundar Pichai and ask that Trump be banned from their platforms. “Hey Mark Zuckerberg, @jack, @SusanWojcicki and @sundarpichai — Donald Trump just incited a violent attack on American democracy. Is that FINALLY enough for you to act?! It’s time to ban Donald Trump from your platforms once and for all!,” his enthusiastic tweet read.

I join President-elect @JoeBiden in calling for the assault on the Capitol and our nation’s public servants to end, and as he said, “allow the work of democracy to go forward.”

Hailey Baldwin spoke out about the protests by reposting a photo that activist Shaun King posted to Instagram and adding her own comments to it. In the pic, a protester could be seen sitting at the stage and microphone on the floor of Congress. “This is So embarrassing. HE LOST!!!!!!!! SAY IT WITH ME: HEEEEE LOST,” she wrote before comparing the protests to a “bad breakup”. “MOVE ON!!! This is like a bad embarrassing breakup!!!!!”

The epitome of white privilege! How disturbing!!! I am sick to my stomach ! pic.twitter.com/XcCiCUmt1X

Khloe Kardashian spoke out in the wake of Trump supporters storming the Capitol. She took to Twitter, revealing she was “sick to [her] stomach” after seeing the images of rioters in Washington DC. “The epitome of white privilege! How disturbing!!! I am sick to my stomach,” she wrote.

Just think of the carnage had they not been white.

Avengers star Chris Evans took to Twitter, reminding his followers of the violence that occurred when Black Lives Matter protesters took to the streets in the summer of 2020. “Just think of the carnage had they not been white,” he wrote.

The irony is pretty funny………weren’t people just wild animals in the summer for demanding justice and now?🤔🤔🤔🤔……Let me just watch.

“WAP” hitmaker Cardi B tweeted, “The irony is pretty funny………weren’t people just wild animals in the summer for demanding justice and now?” She also issued a warning to her followers: “And y’all better NOT BE OUTSIDE!!These are wild thugs out here ! Stay home.This ain’t our business.Stay at home safe but dangerous!”

Gabrielle Union shared a clip, which showed law enforcement taking selfies with some of the individuals who broke into the Capitol. “Welp,” she simply wrote, while re-posting the video.

President Trump has to do something NOW and stop his supporters – people are going to get hurt or die!!!

My heart is completely broken watching this.

The View’s Republican commentator Meghan McCain wrote, “President Trump has to do something NOW and stop his supporters – people are going to get hurt or die!!!” adding, “This one one of America’s darkest days in our entire history.”

You have done nothing but encourage this. You have corrupted law and now order. This is what your influence looks like. You can't even control your own proxies https://t.co/jX48y9LSnR

TV journalist Chris Cuomo called out Donald Trump, writing, “You have done nothing but encourage this. You have corrupted law and now order. This is what your influence looks like. You can’t even control your own proxies.” His tweet came in response to Trump’s plea for protesters to “support” Capitol police.

Tina Knowles shared a photo of protesters breaking through the police barricade. “Wow , is this real? If it is , Where is the teargas and rubber bullets and the things that were used on black lives matter protesters to stop them from destroying fences,” she wrote, referencing the recent Black Lives Matter protests in 2020.

“GOP lawmakers are pleading with Trump on this platform while armed protestors are storming The Capitol,” TV personality Padma Lakshmi tweeted.

🤐i don’t have to say anything else. pic.twitter.com/QjwvvJHW8d

50 Cent simply wrote, “I don’t have to say anything else,” as he shared a photo of armed forces during the Black Lives Matter protests in the summer of 2020.

They would have killed all of us an hour ago 6blocks away. Stay y’all asses at home‼️‼️ this is not our fight. Watch them be the “thugs” they called us💯 pic.twitter.com/wTXUozQ14w

Tamar Braxton also urged her followers to be safe, while reminding them of the protests that happened in DC just a few months prior. “They would have killed all of us an hour ago 6blocks away. Stay y’all a**es at home.”