A Super Bowl victory celebration is always the very best time to see Tom Brady, wife Gisele Bundchen and their children all together, smiling and full of joy after a long NFL season for the quarterback. After the 43-year-old led his new team the Tampa Bay Buccaneers to their first Super Bowl win since 2002, Tom, Gisele, their children Benjamin, 11, Vivian, 8, and Tom’s 13-year-old son Jack by ex Bridget Moynahan posed on the field together for the happiest of family photos. The 40-year-old supermodel shared that snapshot to Instagram on Feb. 8, along with glowing words about Tom’s dedication to the sport of football. She also includes a series of additional photos of the family at the big game that you can see here. 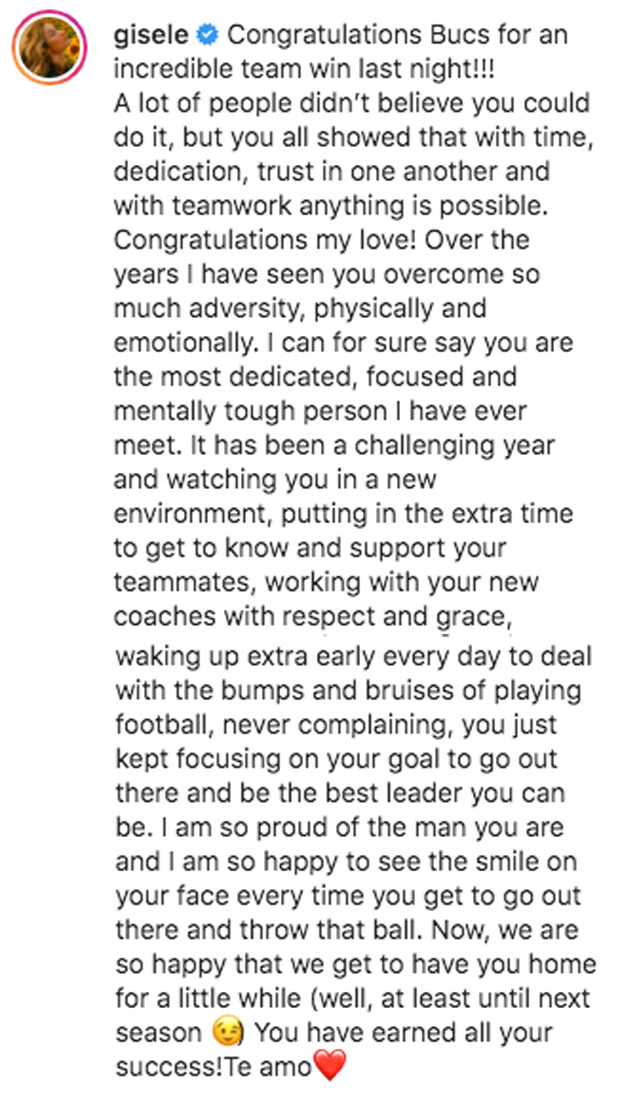 “Congratulations Bucs for an incredible team win last night!!! A lot of people didn’t believe you could do it, but you all showed that with time, dedication, trust in one another and with teamwork anything is possible,” she began. “Congratulations my love! Over the years I have seen you overcome so much adversity, physically and emotionally. I can for sure say you are the most dedicated, focused and mentally tough person I have ever met,” the Brazilian beauty said of her husband of nearly 12 years.

Tom left the New England Patriots — the team he’d been with since he was drafted in 2000 — in the off season to head to Tampa Bay for a two year, $50 million deal. That meant an entirely new set of coaches and players to get to know and work with. Gisele praised Tom for going the extra mile to not only turn around the team’s fortunes, but lead them to a victory in the NFL’s biggest game.

“It has been a challenging year and watching you in a new environment, putting in the extra time to get to know and support your teammates, working with your new coaches with respect and grace, waking up extra early every day to deal with the bumps and bruises of playing football, never complaining, you just kept focusing on your goal to go out there and be the best leader you can be,” Gisele gushed about about her G.O.A.T. hubby.

Related: Tom Brady’s Super Bowl Wins: How Many Times Did The QB Nab A Ring?

Tom Brady when he saw his family ❤️

“I am so proud of the man you are and I am so happy to see the smile on your face every time you get to go out there and throw that ball. Now, we are so happy that we get to have you home for a little while (well, at least until next season. You have earned all your success! Te amo,” Gisele finished in her tribute to Tom.

Brady broke his own record of being the player with the most Super Bowl wins by securing his seventh ring on Feb. 7 in the Bucs’ 31-9 pounding of the Kansas City Chiefs. He has also surpassed the most winning Super Bowl teams as well. He brought six Super Bowl titles to the Patriots, which tied the Pittsburgh Steelers, who had the same number of title victories. Tom now has more Super Bowl wins than either of the best teams to ever play football.