With one of the NFL’s greatest all-time quarterbacks in 43-year-old Tom Brady and his new Tampa Bay Bucs going up against defending Super Bowl champ and MVP Patrick Mahomes, 25 and his Kansas City Chiefs in Super Bowl 55, it was bound to be a game for the ages. But in the end, Brady looked so dominant while leading his Bucs to a huge win 31-9, and broke his own record with a seventh Super Bowl victory. After the game, Tom was named Super Bowl MVP for the fifth time!

2021. When you can work from home and win the #SuperBowl… pic.twitter.com/mSyFuPBmGT 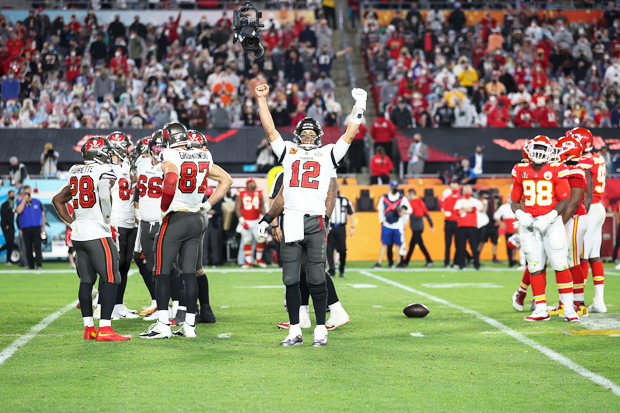 Tampa Bay quarterback Tom Brady celebrates as the clock ticks down to their 31-9 win over the K.C. Chiefs in Super Bowl 55. Photo credit: Ben Liebenberg/AP.

The first half belonged to Brady, with three touchdown throws that put the Bucs up 21-6 at halftime. He landed two end zone passes to his former New England tight end Rob Gronkowski, 31, with another connecting with Antonio Brown. K.C. didn’t get any TD’s, settling for two field goals, as the got hammered with holding calls and penalties that gave Tampa plenty of additional yardage. As the third quarter began, running back Leonard Fournette ran for another touchdown. Mahomes didn’t have a single touchdown pass all night, and their nine points were thanks to two first half field goals.

Tom actually had a rare Super Bowl home field advantage, with the game long ago scheduled to take place at Tampa’s Raymond James Stadium. He left his longtime home with the New England Patriots in 2020 after leading the team to six Super Bowl victories, this time hoping to bring the Tampa Bay Buccaneers to the Super Bowl for the first time since 2002. Mission accomplished with their huge victory!

Tom won the first of his record six Super Bowls 19 years ago in 2002, when the Patriots beat the St. Louis Rams. At the time, Patrick was six-years-old!  Tom most recently led the Pats to victory in 2018’s Super Bowl LIII, beating the Los Angeles Rams, 13–3. When he left NE in the 2020 off season for Tampa Bay, folks knew he would re-invigorate the Florida team. But he did more than that. 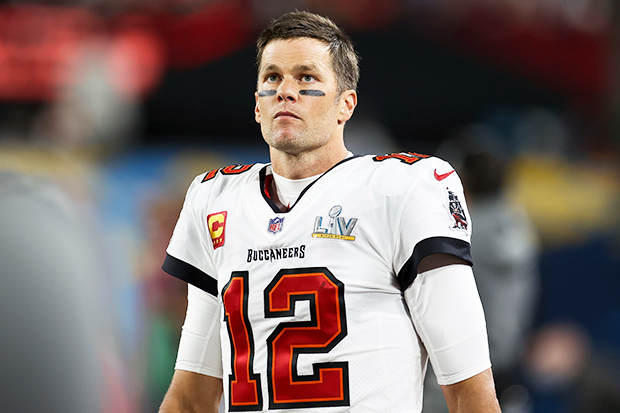 Tom Brady is officially the G.O.A.T. of the NFL, with a record seven Super Bowl wins. Photo credit: AP.

Related: Tom Brady’s Super Bowl Wins: How Many Times Did The QB Nab A Ring?

Tom got his favorite target in good pal Gronkowski to come out of retirement and join him in what has become known as “Tompa Bay” or “Tampa Brady.” Coach Bruce Arians helped bring additional talent to the team such as running back Leonard Fournette, wide receiver Antonio Brown and build a powerful defense. And it can’t be stressed enough….Tom is 43-years-old!!! And literally at the top of his game.

But Kansas City knows they have a player for the ages in Patrick. They signed him to a record 10-year deal worth $503 million dollars to lead the Chiefs for the next decade to come. In just his second year with the team he proved his worth by bringing K.C. their second Super Bowl win ever — the first being in 1970 — by beating the San Francisco 49ers, 31–20. Mahomes was declared the games’s MVP at just 24-years-old. But for Super Bowl 55, the night belonged to Brady, who has more Super Bowl wins than any player in history.