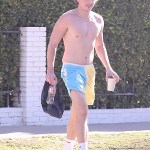 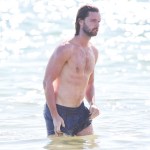 Adam Levine worked up a sweat while training in his backyard shirtless on a sunny day. ‘The Voice’ alum confessed that he doesn’t even know what he’s training for!

He’s stuck at home, but he’s staying fit! Adam Levine, 41, showed off his intense workout routine in a series of videos on his Instagram Stories, and he’s killing it. “Not sure what I’m training for… but whatever it is, I’m ready,” Adam captioned two videos that showed him jump roping effortlessly in his backyard. He added on a third video of himself lifting kettlebells, “LFG [let’s f**king go], cuz seriously why not?”

What perfect timing that Adam’s shirtless content came so close to the anniversary of his Super Bowl halftime show! Maroon 5 rocked the stage during the 2019 championship and Adam shed his shirt halfway through while surrounded by giant flames, showing off his incredible abs. He got trolled a little bit during the performance for his… unique tattoos, but took viewers’ “jealousy” in stride.

While The Weeknd rocked the Super Bowl halftime show this year, Adam did make an appearance during the big game! T-Mobile’s adorable and hilarious Super Bowl commercial reveals that Adam is “responsible” for setting up his former The Voice co-stars, Gwen Stefani and Blake Shelton! Gwen’s spotty cell connection leads Adam to think the “Sweet Escape” singer wants to date “somebody country, uncultured and who’s threatened by a strong confident woman.”

Adam immediately thinks of his guy Blake. We all know how that turned out. Adam’s influence or not, Gwen and Blake fell head over heels in love, and are now engaged five years later. Look at what that (shirtless) cupid was able to make happen!