“Three-time GRAMMY winner @theweeknd takes the stage during #PepsiHalftime,” the official account for the Recording Academy, aka The Grammys, tweeted on Feb. 7, right before The Weeknd left those watching Super Bowl LV stunned by his performance. While the tweet was in good nature, it was a bit tone-deaf to some fans, considering how The Weeknd (Abel Tesfaye) was completely shut out of the 63rd Grammy Awards, despite “Blinding Lights” being one if not the most successful songs of 2020. Fans made sure to let @RecordingAcad know they messed up.

“me searching for a reason as to why the Grammys would post this after snubbing the Weeknd.” “Snubbing him then posting this y’all are way too shameless smh.” “This is the artist you snubbed this year.” “LMFAOOOO NOT YALL TWEETING ABOUT HIMMMMM.” “The nerve.” The tweet was quickly ratioed to the moon and back, with fans shocked that the Grammys would try to attach their name to The Weeknd.

When the nominees for the 2021 Grammys were unveiled in November and After Hour was shut out of every category, The Weeknd reacted to the snub by tweeting, “The Grammys remain corrupt. You owe me, my fans, and the industry transparency.” He later posted a statement to his Instagram, per Variety, that read, “Collaboratively planning a performance for weeks to not being invited? In my opinion, zero nominations = you’re not invited!” The Weeknd was allegedly working with the Grammy organizers about performing on the show, but Variety reported that “negotiations became fraught” when he was given the Super Bowl Halftime Show spot.

Ain’t no way y’all claiming The Weeknd when y’all snubbed him from a single grammy nomination after arguably the best year of his career. https://t.co/0RWg8bP7ba

Supposedly, there were issues with The Weeknd performing at both the Super Bowl and The Grammys since both shows are on CBS this year (the Grammys were originally scheduled for Jan. 31, one week before the Super Bowl, before they were postponed to March 14 due to a spike in COVID-19 cases.) “We understand that The Weeknd is disappointed at not being nominated,” Harvey Mason Jr., the interim Recording Academy present, told Variety. “Unfortunately, every year, there are fewer nominations than the number of deserving artists.  But as the only peer-voted music award, we will continue to recognize and celebrate excellence in music while shining a light on the many amazing artists that make up our global community. To be clear, voting in all categories ended well before The Weeknd’s performance at the Super Bowl was announced, so in no way could it have affected the nomination process.”

After this shutout, The Weeknd was “basically going to use the snub as more of a chip on his shoulder for his Super Bowl performance,” a source told HollywoodLife EXCLUSIVELY. “That is his real reward. He is now even more motivated to kill it for the Halftime show. They can snub him, but he will have the last laugh.” 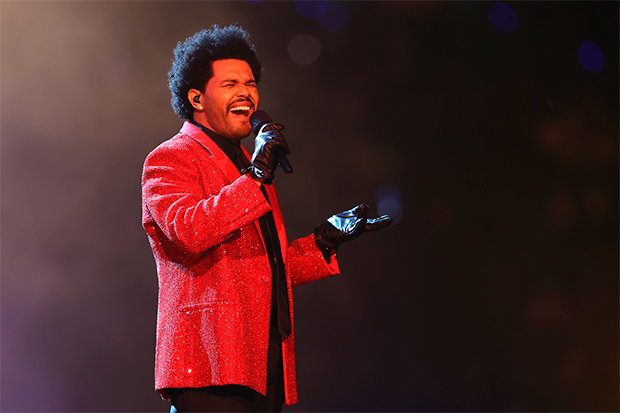 “Look, I personally don’t care anymore,” The Weeknd said to Billboard in a January 2021 interview. “I have three Grammys, which mean nothing to me now, obviously. It’s not like, ‘Oh, I want the Grammy!’ It’s just that this happened, and I’m down to get in front of the fire, as long as it never happens again. I suck at giving speeches anyways. Forget awards shows.” He described the snub as “an attack,” much like a “sucker punch.”

Related: Donna Kelce: 5 Things To Know About Travis & Jason’s Mom As They Face Each Other In Super Bowl

“Because it just kind of hit me out of nowhere. I definitely felt … I felt things,” he told Billboard. “I don’t know if it was sadness or anger. I think it was just confusion. I just wanted answers. Like, ‘What happened?’ We did everything right, I think. I’m not a cocky person. I’m not arrogant. People told me I was going to get nominated. The world told me. Like, ‘This is it; this is your year.’ We were all very confused.”