Actor Kirk Douglas lived a remarkable life, as well as an extremely long one. He made it to the age of 103 before passing away from natural causes on Feb. 5, 2020, surrounded by loved ones. His Oscar winning son Michael Douglas, 76, is paying tribute to the Spartacus star on the one year anniversary of his passing. He noted that Kirk left this world right before it started falling to pieces, starting with the COVID-19 pandemic causing strict and unprecedented home lockdowns across the United States in March, about five weeks after the Hollywood legend died.

Michael shared an Instagram photo posing alongside his elderly yet spry looking father on what appeared to be one of his final birthdays, as red, gold and silver balloons could be seen behind them, several with the name “Kirk” written on them. Next to the photo, the Wall Street star wrote, “Can’t believe it’s been a year since you left us. At 103, you picked a good time to check out. I love you with all my heart! #KirkDouglas”

Not only did Kirk die just before the COVID-19 pandemic swept the United States and completely changed the way people live their lives (and is still raging, as 456,000 Americans have died from the virus as of Feb. 5, 2021), he also wasn’t alive to see the dramatic year unfold. From the economic crisis caused by the coronavirus, there were deadly police killings of Black Americans that ultimately lead to anti-police and  Black Lives Matter rallies across the U.S., a contentious presidential race followed by an election that Donald Trump would not concede a loss in, and deadly wildfires across the Western U.S. 2020 was a very messy year. 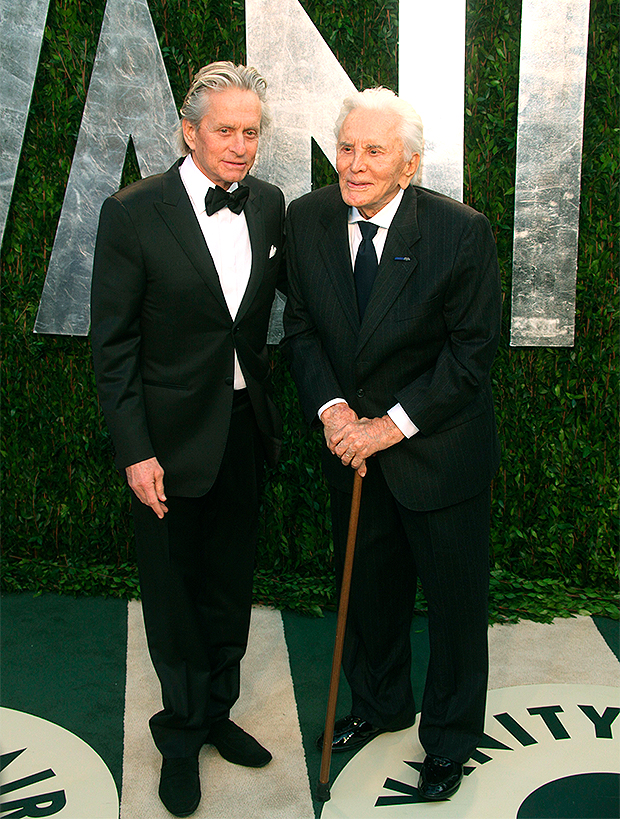 Michael’s wife, actress Catherine Zeta-Jones commented in his post about his dad, writing “Love you Pappy” along with a prayer hands emoji. Fellow actors sang Kirk’s praises, as Alec Baldwin gushed, “He was the King” while Anthony Hopkins commented, “One of a kind, a legend, loved by all.”

It was one year ago today that Michael told the world about the loss of his beloved father. “It is with tremendous sadness that my brothers and I announce that Kirk Douglas left us today at the age of 103,” he a statement posted to Instagram. “To the world, he was a legend, an actor from the golden age of movies who lived well into his golden years, a humanitarian whose commitment to justice and the causes he believed in set a standard for all of us to aspire to.” Michael went on to praise his dad as a wonderful father and grandfather. “Let me end with the words I told him on his last birthday and which will always remain true. Dad – I love you so much and I am so proud to be your son.”

Related: Michael Douglas’ Kids: Everything To Know About His 3 Children