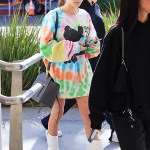 Olivia Jade teased that she had ‘almost finished’ her next YouTube video, featuring her ‘every day makeup’ tutorial! Check out the pics from the social media star’s Instagram Story.

Olivia Jade is slowly but surely returning to YouTube after her disgraced parents, Lori Loughlin and Mossimo Giannulli, served time for their involvement in the college admissions scandal. On January 25, the 21-year-old social media star took to her Instagram Story to tease her upcoming vlog. “Almost finished editing this ‘every day’ makeup look! It will be up in the next few days,” she wrote, adding an image of herself staring off into the distance.

The image in her Instagram Story was followed by another selfie of Olivia, this time with her hair tossed up into a messy bun with wisps of hair framing her face. “Love how it turned out,” she told her over one million followers. The Instagram Story posts and Olivia’s upcoming video come just days after she made her return to YouTube.

Olivia’s first video since the college admissions scandal was posted on January 21 and even featured Olivia’s mom, Lori. Naturally, fans were curious about why Olivia chose to return to her platform, and she offered her reply. “I think if you have any questions for me or you have anything to say or you’re like, ‘Why are you back,’ you can go watch that interview,” Olivia said, referencing her appearance on Red Table Talk.

“Her Red Table Talk interview was quite liberating for her in a way and she’s now ready to launch this next chapter for her,” a source shared EXCLUSIVELY with HollywoodLife. “It helped her get her story out there in the way she wanted to tell it while getting ready to get back in the public eye.” As for why Olivia chose the latter half of January 2021 to return to YouTube, HL‘s insider learned about the factors that influenced her decision.

“She wanted her mom to get back home first,” the source revealed. “And then get back to work in the new year.” Lori was released from prison on December 28 after serving two months in prison. The former Full House star and her fashion designer husband pled guilty to paying $400,000 in bribes to get their daughters into the University of Southern California.