The friendship endures. Former First Lady Michelle Obama and Former President George W. Bush shared another small moment together that caught the eye of Twitter users. At the January 20 inauguration of Joe Biden, the two caught up, along with their significant others (George’s wife, Laura Bush, and Michelle’s husband, Barack Obama). Although they were all wearing face masks, it was evident from their eyes that they had smiles on their faces as they gathered in a group and chatted. 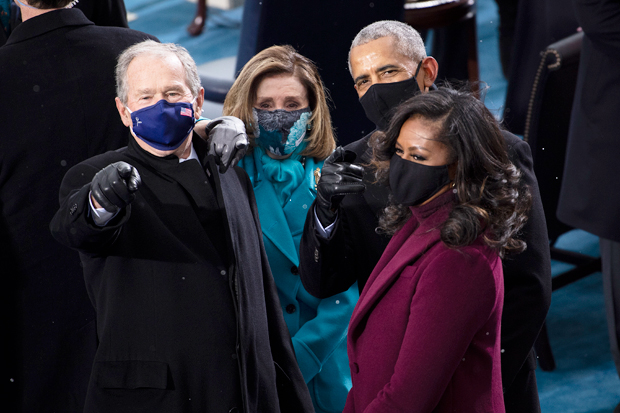 Cute, right? Obama and Bush have forged an unlikely friendship over the years since her husband, Former President Obama, took office in 2009. Often seat-mates at official functions, they’ve forged a close bond. Bush told People in 2017 that, “She kind of likes my sense of humor. Anybody who likes my sense of humor, I immediately like. I needle her a little bit and around her, I’m fairly lighthearted. [The Obamas] are around serious people all the time and we just took to each other.”

The two delighted viewers in 2018, when Bush was spotted passing Obama a cough drop during Senator John McCain‘s funeral. Afterward, Obama told TODAY that Bush is “my partner in crime at every major thing where all the ‘formers’ gather. So we’re together all the time. I love him to death. He’s a wonderful man, he’s a funny man.” He also handed her a mint at his father’s funeral later that same year. 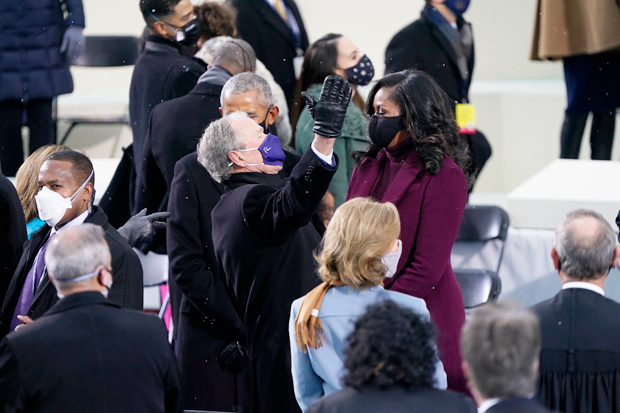 Prior to the 2021 inauguration, Obama penned a heartfelt message on Instagram, including a photo from her husband’s own 2019 ceremony. “Today is the day. After a disturbing era of chaos and division, we are entering the next chapter of American leadership with the inauguration of @JoeBiden and @KamalaHarris. Right now, I’m feeling more than just relief at putting the past four years behind us. I’m feeling genuinely hopeful for what’s to come.

“Joe Biden and Kamala Harris are the kind of leaders our nation deserves—decent, hardworking people who reflect the best of our values,” she continued. “Most of all, they’re guided by empathy, honesty, and a willingness to put the needs of our country before their own. They’re determined to make life better for all Americans, and I know they will bring us back the stability that has been sorely lacking through what has been a devastating pandemic.”