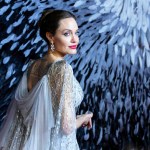 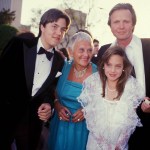 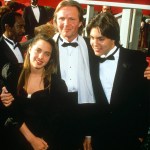 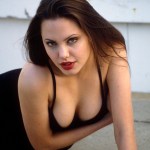 Angelina Jolie looked like the ultimate doting mom when she held hands with her oldest daughter Zahara during an afternoon shopping outing in Los Angeles.

Angelina Jolie, 45, kept her daughter Zahara, 16, near when the two went to Target on Jan. 16. The actress and her oldest gal were spotted holding hands while visiting the popular store as well as a Starbucks and looked like the perfect mother-daughter combination. Angelina wore a long black coat over a black top and matching pants with a black mask and Zahara was in a gray hoodie and black leggings with a black mask.

This is not the first time Angelina has been seen on shopping trips with her kids. The doting mom if often out and about with her brood and even went to an Ethiopian boutique with Zahara as well as her younger daughter Shiloh, 14, on Zahara’s birthday on Jan. 8. The long-haired beauty wore a long white fitted dress that time and her girls wore their own casual and comfortable attire.

Before that outing, Angelina was seen shopping at a craft store with her youngest daughter Vivienne, 12, in Nov. They had a cart full of supplies that could have been for the holidays and kept a low-profile while out and about, which Angelina usually does when she’s going on regular outings with her kids.

Although she’s usually seen shopping and going to stores with her kids, which also includes Pax, 16, and Knox, 12, along with her oldest child, Maddox, 19, Angelina recently gave a little inside look into how her sons and daughters are just like anyone else their ages when it comes to their phones. She was discussing the anti-cyberbullying app, Kindly, with young scientist Gitanjali Rao, 15, when she joked about her kids, who she shares with ex Brad Pitt, , not letting her “touch” their phones.

“My kids would be like, ‘Don’t touch my phone, I’ll do it myself,'” she hilariously told Gitanjali about the app. She also explained that they most likely wouldn’t be objected to downloading the app, which “detects cyberbullying at an early stage, based on artificial-­intelligence technology,” since it’s not designed to control them. “The goal is not to punish,” she said. “As a teenager, I know teenagers tend to lash out sometimes. Instead, it gives you the chance to rethink what you’re saying so that you know what to do next time around.”