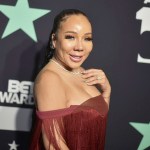 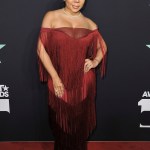 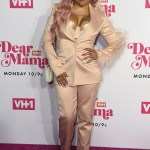 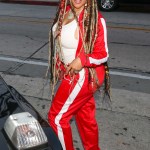 Tiny looks totally unrecognizable after her latest hair makeover! The singer shared a new snap of herself rocking a bright green wig, and we’re obsessed.

Tameka “Tiny” Harris can truly pull off any hair color! The 45-year-old has switched things up, and revealed her latest makeover involving an emerald green wig. She took to her Instagram Story on January 16 to share a selfie of her bright new locks, and thanked her stylist (@darealterrencedavidson on Instagram). He also posted a snap of Tiny, writing, “she said green, i said OK!!! @majorgirl.” The wig was styled in bouncy curls, with a dramatic part to one side, while her makeup look was flawless, as per usual.

The switch up from her usual brunette locks comes just one month after her and her husband T.I. “Tip” Harris‘ new grandchild was born. Zonnique Pullins, 24, gave birth to an adorable baby on December 15, and T.I. and Tiny recently gave an update on how the mom and bub were doing. “Zonnique’s doing great,” Tiny shared on the December 22 episode of FOX Soul’s The Mix. ” She’s getting her rest in, as much as she can. The baby’s sleeping all the time so she’s been able to rest a lot. I want the baby to be up more but I understand that the baby needs to sleep so she can get her rest. So I’m not gonna, you know, be a bad grandma  just yet…I would like the baby be up more, because she’s always sleeping…But I’m gonna give her a couple more weeks and then I’m going to start waking her up.”

When the proud grandma was asked what she wants to be called by her first grandchild, Tiny revealed she had narrowed it down to two options. “I think I’m going to be called ZaZa. It’s cute. And if it’s not ZaZa, I’m gonna go with Honey. So it’s gonna be one of the two.” Too cute!