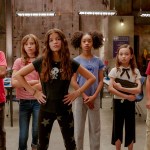 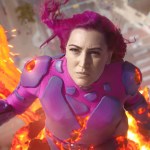 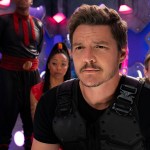 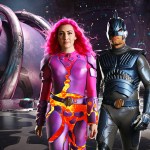 After its major success on Netflix, ‘We Can Be Heroes’ is getting a sequel! Mother-son acting duo Brittany Perry-Russell and Isaiah Russell-Bailey spoke to HL about what to expect!

We Can Be Heroes saw kids saving the day as their superhero parents were overtaken by alien invaders. The Netflix movie starring Priyanka Chopra and Christian Slater such a success that a sequel to the film was announced just days later, surprising even the cast! “We were jumping up and down!” Brittany Perry-Russell, who stars as Red Lightning Fury in the movie, told HollywoodLife in an EXCLUSIVE interview. Her son, Isaiah Russell-Bailey who plays Rewind in We Can Be Heroes echoed his mom’s excitement.

“It going to dive more into the characters that didn’t get to show too much. I think what Robert [Rodriguez] is going to do is first show you how each kid got their powers from their parents,” Brittany continued. “It’ll be more of a backstory, but that really is all we know. Robert is still working on it, but there will definitely be a sequel!” In We Can Be Heroes, Brittany’s Red Lightning Fury doesn’t show off her powers, so we’re excited to find out what her back story could be. “I keep trying to ask Robert and he said I’m not going to know until I get the script!” she laughed. “I think it should definitely be something to do with lightning though. I do love the aspect of being a Black family full of ninjas and Robert always outside of the box, so either way I’d love to do more fighting scenes this time around.”

Isaiah is a pro at fighting scenes, which he actually performed himself in the movie! “When I got the movie I was like, ‘hey, maybe I can show them everything I know how to do,'” he said about his training in tricks and fight choreography. “They were ready for us to train for two weeks once we got to Austin to film, so we spent time training on harnesses and fighting — Robert had no idea I could do this on my own.”

It’s no surprise that Isaiah excelled at parkour and choreography, as his mom has worked for years as a choreographer and dancer for some of the biggest pop stars in the world like Rihanna, Katy Perry and Meghan Trainor. It was a tour with Janelle Monáe that actually pushed both Brittany and Isaiah to expand their careers. “She’s just a jack of all trades and that really was something we were both inspired by and I think that gave me a sense of peace,” Brittany said. “At that time, we were both around her a lot and she was just great, always telling us to give things a try.”

While you anxiously await the sequel to We Can Be Heroes, we highly recommend watching Brittany and Isaiah on TikTok!