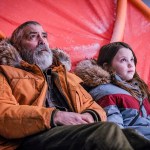 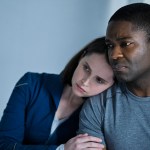 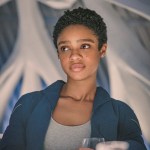 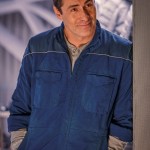 ‘The Midnight Sky’ is George Clooney’s space epic, and Tiffany Boone plays a pivotal role in the film. HL spoke EXCLUSIVELY with Tiffany about Maya’s fate and whether she would have gone back to Earth.

The Midnight Sky is an emotional and thrilling space drama that follows a scientist (George Clooney) in the Arctic as he races to stop a team of astronauts from returning home after a cataclysmic event. Tiffany Boone stars as Maya, one of the astronauts onboard the spacecraft.

Maya tragically dies after suffering an injury while trying to fix the comms and radar on the outside of the ship. Maya’s death is a harrowing scene as Sully, Adewole, and Sanchez desperately try to save her. When they attempt to get her out of her spacesuit to assess her injury, so much blood flows from her suit as they take her helmet off. Tiffany talked with HollywoodLife EXCLUSIVELY about the devastating (and frankly, horrifying) scene in the film.

“Because we’d been preparing for that moment for months at that point, there was a lot of pressure built up there,” Tiffany told HollywoodLife. “There were so many things going on. I mean, Felicity [Jones] was pregnant, she was on this chair, everyone tried to make sure that she was safe so she doesn’t fall. I was on wires and in this spacesuit. There were just a lot of things floating around, so it can be challenging to focus on the actual moment that you’re trying to create. I always look to my fellow actors in moments like that, especially in moments where it’s like, how are we going to make this happen? How are we going to ground this scene? I always find or hope to find my footing in the eyes of an actor. Having Felicity sitting right there as a grounding force in that moment was so helpful because the blood was fake. We were imagining all of that. It’s all in our imagination. It was such an intense moment. It was just really connecting with Felicity and hoping that something came through.”

After Maya’s death and as the spacecraft nears closer to Earth, Sanchez and Mitchell decide to go back home despite the risks. Mitchell is determined to find his family, while Sanchez goes back to Earth to bury Maya. HollywoodLife asked Tiffany what she thinks Maya would have done had she been alive, and she revealed her own secret storyline for her character.

“I think she would have gone back to Earth,” Tiffany said. “I think being the youngest on the ship it was especially hard to be away. It was the first time she’d ever been away from her family. The rest of them are veterans, and they’ve done it before. For her, I think there’s a real push to get back home. I had a little secret of a storyline in my head that right before she left on this two-year voyage, she realized that she was in love with her best friend, who is one of the girls in her virtual reality. To me, that was really her pull, that she had to get back to her and tell her best friend that she loved her. I think no matter what Maya would have made that decision to go back to her.”

Maya’s friendship with Sanchez is a subtle one, but it’s clear that they had a strong father-daughter dynamic. Tiffany told HollywoodLife that she and Demián [Bichir] actually shot more scenes, but they were cut out of the film. “I think their relationship is really beautiful,” she said. “I love Demián. I just love him so much. He’s one of the best people I’ve ever met.”

The actress, who also earned critical acclaim earlier this year for playing young Mia in Little Fires Everywhere, opened up about why working with George was such a great experience. “George is an actor’s director,” Tiffany said. “I think most of us look for that in a director. He’s collaborative. He speaks our language. Some directors don’t know how to communicate with actors about what they need because we speak different languages. So saying go faster, or be louder, little things like that don’t necessarily help an actor. He knows how to speak to us. He also knows exactly what he wants. He knows most actors don’t want to do a million takes. You don’t want to keep doing the thing over and over and over and over again. So he’s like, look, I got it, let’s move on. I’ll let you know if I need more. But if I have it, let’s keep it going. He doesn’t do extra setups that he knows he’s not going to need. He’s just efficient. He knows as an actor that you get pretty worn out during the course of a shoot, so he’d shoot for like eight hours a day. He’s a dream. George is a dream.” The Midnight Sky is now streaming on Netflix.